A to Z Mysteries: The Jaguar's Jewel (Paperback) 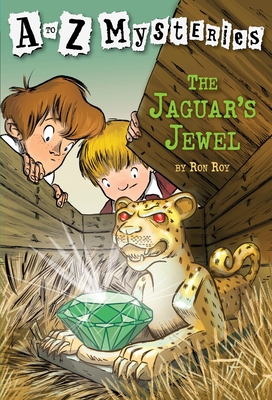 A to Z Mysteries: The Jaguar's Jewel (Paperback)

This is book number 10 in the A to Z Mysteries series.

Help Dink, Josh, and Ruth Rose solve mysteries from A to Z!

Kids love collecting the entire alphabet and super editions! With over 8 million copies in print, the A to Z Mysteries® have been hooking chapter book readers on mysteries and reading for years. Now this classic kid favorite is back with a bright new look!

J is for Jewel . . . New York is the emerald city! Dink’s uncle’s museum there has a new treasure—a golden jaguar statue with an emerald between its paws. But someone swaps the jewel for a fake! Who stole the jaguar’s jewel? Dink, Josh, and Ruth Rose are sure to find out!

RON ROY has been writing books for children since 1974. He is the author of dozens of books, including the popular A to Z Mysteries®, Calendar Mysteries, and Capital Mysteries. When not working on a new book, Ron likes to teach tricks to his dog Pal, play poker with friends, travel, and read thrilling mystery books.

STEPHEN GILPIN is the award-winning illustrator of dozens of children’s books, including the popular and very funny Pirate Mom. He brings his fresh, kid-friendly style to all the covers of the A to Z Mysteries® series.