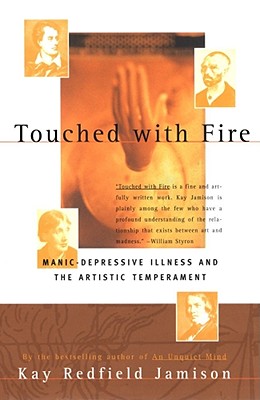 By Kay Redfield Jamison
List Price: $18.99
Our Price: $18.00
(Save: $0.99 5%)
On Our Shelves Now at:
The definitive work on the profound and surprising links between manic-depression and creativity, from the bestselling psychologist of bipolar disorders who wrote An Unquiet Mind.

One of the foremost psychologists in America, “Kay Jamison is plainly among the few who have a profound understanding of the relationship that exists between art and madness” (William Styron).

The anguished and volatile intensity associated with the artistic temperament was once thought to be a symptom of genius or eccentricity peculiar to artists, writers, and musicians. Her work, based on her study as a clinical psychologist and researcher in mood disorders, reveals that many artists subject to exalted highs and despairing lows were in fact engaged in a struggle with clinically identifiable manic-depressive illness.

Jamison presents proof of the biological foundations of this disease and applies what is known about the illness to the lives and works of some of the world's greatest artists including Lord Byron, Vincent Van Gogh, and Virginia Woolf.
Kay Redfield Jamison, PhD, is the bestselling author of An Unquiet Mind, Touched with Fire, and other books. She is a professor of psychiatry at the Johns Hopkins University School of Medicine, and has been named a “Hero of Medicine” by Time.