Taking Wing: Archaeopteryx and the Evolution of Bird Flight (Paperback) 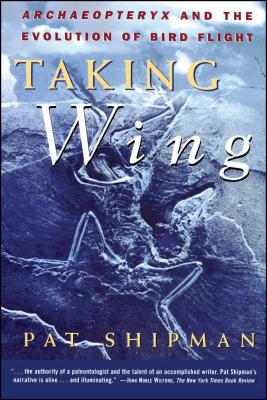 Taking Wing: Archaeopteryx and the Evolution of Bird Flight (Paperback)


Not On Our Shelves—Ships in 1-5 Days
In 1861, just a few years after the publication of Charles Darwin's On the Origin of Species, a scientist named Hermann von Meyer made an amazing discovery. Hidden in the Bavarian region of Germany was a fossil skeleton so exquisitely preserved that its wings and feathers were as obvious as its reptilian jaws and tail. This transitional creature offered tangible proof of Darwin's theory of evolution.
Hailed as the First Bird, Archaeopteryx has remained the subject of heated debates for the last 140 years. Are birds actually living dinosaurs? Where does the fossil record really lead? Did flight originate from the "ground up" or "trees down"? Pat Shipman traces the age-old human desire to soar above the earth and to understand what has come before us. Taking Wing is science as adventure story, told with all the drama by which scientific understanding unfolds.
Pat Shipman, an anthropologist at Pennsylvania State University, is the author of The Evolution of Racism and, with Alan Walker, The Wisdom of the Bones. She has written extensively on evolution and anthropology for such magazines as Discover, Natural History, New Scientist, and Focus. She lives in State College, Pennsylvania.
John Noble Wilford The New York Times Book Review [An] excellent book. [Shipman's] narrative is alive with stories...and takes the reader into the minds of these scientists. She seems to be on a journey herself, generously bringing us along.

Will St. John Detroit Free Press Taking Wing gives its readers a splendid view of both birds and brains in action.