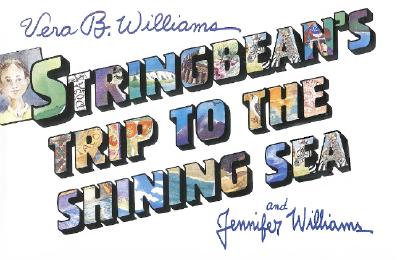 By Vera B. & Jennifer Williams, Vera B. Williams (Illustrator)

Dear Reader,
Here are the postcards and snapshots that Stringbean Coe and his brother Fred sent home from the long trip they made one summer in Fred's truck.

Their grandfather made this album for the family--and for you. Enjoy yourselves!

Stringbean Coe, his big brother, Fred, and their dog, Potato, are driving from Kansas to California in a pickup truck with a little house built on the back. Reading the postcards they send home every day is the next best thing to having a cross-country adventure all your own.

"A good-hearted celebration of life and experience, and a gift to the public."--School Library Journal

Vera B. Williams is the creator of many distinguished books and was the U.S. Illustrator Nominee for the 2004 Hans Christian Andersen Award. She lives in New York City.

"Throughout my childhood I was encouraged to make pictures, tell stories, act, and dance&#8212all of this at a heaven in our New York City neighborhood called the Bronx House.

"On Saturdays I painted with a crusading art director, Florence Cane. In her book The Growth of the Child Through Art, I appear under the name Linda. I was sixteen when the book appeared and embarrassed by it. But at age nine I had been totally proud when a painting of mine was exhibited at the Museum of Modern Art and I was later shown in the Movietone News explaining to Eleanor Roosevelt its Yiddish title, "Yentas."

"In 1945 I went to Black Mountain College in North Carolina, a unique educational community. I graduated in 1949 in graphic art, which I studied with Josef Albers. Along the way I planted corn, made butter, worked on the printing press, and helped to build the house in which I lived with Paul Williams, a fellow student I married there.