The Melancholy Death of Oyster Boy: and Other Stories (Hardcover) 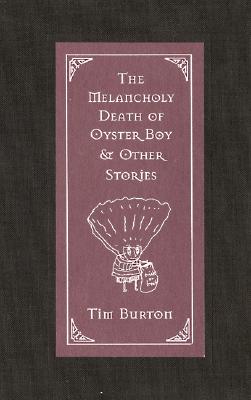 The Melancholy Death of Oyster Boy: and Other Stories (Hardcover)

From breathtaking stop-action animation to bittersweet modern fairy tales, filmmaker Tim Burton has become known for his unique visual brilliance—witty and macabre at once. Now, he gives birth to a cast of gruesomely sympathetic children—misunderstood outcasts who struggle to find love and belonging in their cruel, cruel worlds. His lovingly lurid illustrations evoke both the sweetness and tragedy of these dark yet simple beings—hopeless, hapless heroes who appeal to the ugly outsider in all of us, and let us laugh at a world we have long left behind (mostly, anyway).

Tim Burton, director and artist, is widely regarded as one of cinema’s most imaginative and visual filmmakers. Both his live-action and animated films have earned Academy Awards, Golden Globes, BAFTAs and many other industry accolades, cementing his status as one of the greatest film makers of our time.

He has a dedicated following, notably for classic features such as Beetlejuice (1988); Edward Scissorhands (1990); and Sweeny Todd, the Demon Barber of Fleet Street (2007) as well as blockbuster hits Batman (1989) and Batman Returns (1992); Charlie and the Chocolate Factory (2005); and Alice in Wonderland (2010). He helped to reinvigorate the stop-motion industry with his 1993 creation and cult classic Tim Burton’s The Nightmare Before Christmas; followed by Corpse Bride (2005) and Frankenweenie (2012). Tim most recently produced and directed four episodes of the hit Netflix series, Wednesday(2022).

Long before becoming a director, Burton expressed himself through drawing, painting, poetry and photography, all of which have been documented in books The Melancholy Death of Oyster Boy & Other Stories, The Napkin Art of Tim Burton and the 2009 release, The Art of Tim Burton, a 430-page volume comprising more than 40 years of his personal and professional artwork. Coinciding with the release of The Art of Tim Burton, the Museum of Modern Art opened an extensive exhibition of his work in New York, which went on to tour in Melbourne, Toronto, Los Angeles, Paris, and Seoul. A second exhibition of his artwork, The World of Tim Burton, continues to tour internationally.