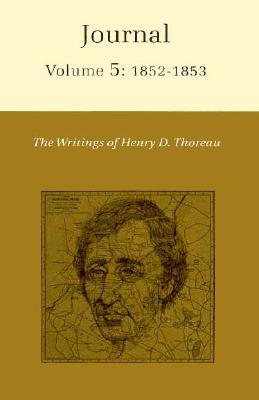 This is book number 12 in the Writings of Henry D. Thoreau series.

From 1837 to 1861 Thoreau kept a journal that began as a conventional record of ideas, grew into a writer's notebook, and eventually became the principal imaginative work of his career. The source of much of his published writing, the Journal is also a record of both his interior life and his monumental studies of the natural history of his native Concord, Massachusetts. In contrast to earlier editions, the Princeton Edition reproduces the Journal in its original and complete form, in a reading text that is free of editorial interpolations but keyed to a comprehensive scholarly apparatus.

Covering an annual cycle from spring 1852 to late winter 1853, Journal 5 finds Thoreau intensely concentrating on detailed observations of natural phenomena and on "the mysterious relation between myself & these things" that he always strove to understand. Increasingly, the Journal attempts to balance a new found scientific professionalism and the accurate recording of phenological data with a firmly rooted belief in the spiritual correspondences that Nature reveals. Fittingly, the year of observation ends with Thoreau pondering an invitation to join the Association for the Advancement of Science, an invitation he ultimately declined in order to pursue his own life studies.
Patrick F. O'Connell is Professor of English at Gannon University.