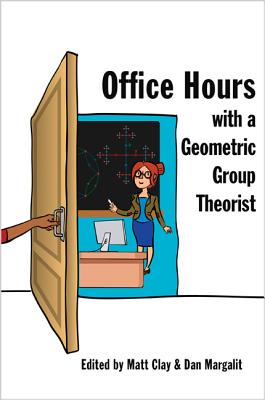 Geometric group theory is the study of the interplay between groups and the spaces they act on, and has its roots in the works of Henri Poincar , Felix Klein, J.H.C. Whitehead, and Max Dehn. Office Hours with a Geometric Group Theorist brings together leading experts who provide one-on-one instruction on key topics in this exciting and relatively new field of mathematics. It's like having office hours with your most trusted math professors.

An essential primer for undergraduates making the leap to graduate work, the book begins with free groups--actions of free groups on trees, algorithmic questions about free groups, the ping-pong lemma, and automorphisms of free groups. It goes on to cover several large-scale geometric invariants of groups, including quasi-isometry groups, Dehn functions, Gromov hyperbolicity, and asymptotic dimension. It also delves into important examples of groups, such as Coxeter groups, Thompson's groups, right-angled Artin groups, lamplighter groups, mapping class groups, and braid groups. The tone is conversational throughout, and the instruction is driven by examples. Accessible to students who have taken a first course in abstract algebra, Office Hours with a Geometric Group Theorist also features numerous exercises and in-depth projects designed to engage readers and provide jumping-off points for research projects.
Matt Clay is associate professor of mathematics at the University of Arkansas. Dan Margalit is professor of mathematics at the Georgia Institute of Technology. He is the coauthor of A Primer on Mapping Class Groups (Princeton).