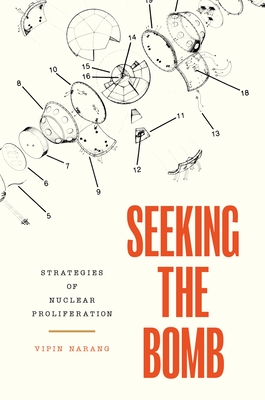 This is book number 189 in the Princeton Studies in International History and Politics series.

Much of the work on nuclear proliferation has focused on why states pursue nuclear weapons. The question of how states pursue nuclear weapons has received little attention. Seeking the Bomb is the first book to analyze this topic by examining which strategies of nuclear proliferation are available to aspirants, why aspirants select one strategy over another, and how this matters to international politics. Looking at a wide range of nations, from India and Japan to the Soviet Union and North Korea to Iraq and Iran, Vipin Narang develops an original typology of proliferation strategies-hedging, sprinting, sheltered pursuit, and hiding. Each strategy of proliferation provides different opportunities for the development of nuclear weapons, while at the same time presenting distinct vulnerabilities that can be exploited to prevent states from doing so. Narang delves into the crucial implications these strategies have for nuclear proliferation and international security. Hiders, for example, are especially disruptive since either they successfully attain nuclear weapons, irrevocably altering the global power structure, or they are discovered, potentially triggering serious crises or war, as external powers try to halt or reverse a previously clandestine nuclear weapons program. As the international community confronts the next generation of potential nuclear proliferators, Seeking the Bomb explores how global conflict and stability are shaped by the ruthlessly pragmatic ways states choose strategies of proliferation.
Vipin Narang is the Frank Stanton Professor of Nuclear Security and Political Science and a member of the Security Studies Program at the Massachusetts Institute of Technology. He is author of Nuclear Strategy in the Modern Era (Princeton). Twitter @NarangVipin