The Great Exception: The New Deal and the Limits of American Politics (Politics and Society in Modern America #120) (Paperback) 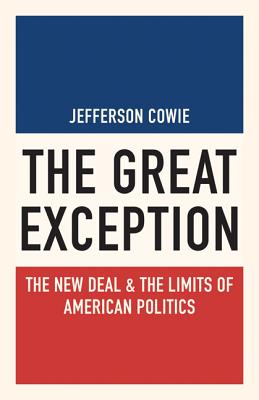 The Great Exception: The New Deal and the Limits of American Politics (Politics and Society in Modern America #120) (Paperback)

How the New Deal was a unique historical moment and what this reveals about U.S. politics, economics, and culture

Where does the New Deal fit in the big picture of American history? What does it mean for us today? What happened to the economic equality it once engendered? In The Great Exception, Jefferson Cowie provides new answers to these important questions. In the period between the Great Depression and the 1970s, he argues, the United States government achieved a unique level of equality, using its considerable resources on behalf of working Americans in ways that it had not before and has not since. If there is to be a comparable battle for collective economic rights today, Cowie argues, it needs to build on an understanding of the unique political foundation for the New Deal. Anyone who wants to come to terms with the politics of inequality in the United States will need to read The Great Exception.
Jefferson Cowie is the James G. Stahlman Professor of History at Vanderbilt University. He is the author of Stayin' Alive: The 1970s and the Last Days of the Working Class. His work has also appeared in such publications as the New York Times, the New Republic, and the Chronicle of Higher Education.