The Art of War: An Illustrated Edition (Illustrated Library of Chinese Classics #5) (Paperback) 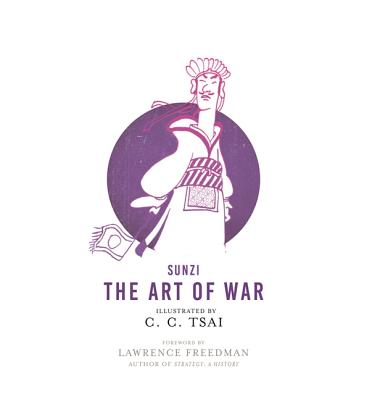 The Art of War: An Illustrated Edition (Illustrated Library of Chinese Classics #5) (Paperback)

C. C. Tsai is one of Asia's most popular cartoonists, and his editions of the Chinese classics have sold more than 40 million copies in over twenty languages. This volume presents Tsai's delightful graphic adaptation of Sunzi's Art of War, the most profound book on warfare and strategy ever written--a work that continues to be read as a handbook for success not just by military commanders but also by leaders in politics, business, and many other fields. Conceived by a Chinese warrior-philosopher some 2,500 years ago, The Art of War speaks to those aspiring to rise through the ranks and help build successful countries. How can that goal best be achieved, and what is the role of warfare, if any, in the process? What are the powers and limits of the general in command? How can you win without going to war? Sunzi's answers to these and other questions are brought to life as never before by Tsai's brilliant cartoons, which show Sunzi fighting on dangerous ground, launching a surprise attack, spying on his enemies, and much more. A marvelously rich introduction to a timeless classic, this book also features a foreword by Lawrence Freedman, one of the world's leading authorities on military strategy, which illuminates how The Art of War has influenced Western strategic thought. In addition, Sunzi's original Chinese text is artfully presented in narrow sidebars on each page, enriching the books for readers and students of Chinese without distracting from the self-contained English-language cartoons. The text is skillfully translated by Brian Bruya, who also provides an introduction.
C. C. Tsai is one of East Asia's most beloved illustrators. His bestselling editions of the Chinese classics have introduced generations of readers to the wisdom of such luminaries as Confucius, Zhuangzi, and Laozi. Born in Taiwan, Tsai now lives in Hangzhou, China. Brian Bruya is professor of philosophy at Eastern Michigan University, where he teaches Chinese and comparative philosophy. He has translated many of Tsai's books into English. Lawrence Freedman is professor emeritus of war studies at King's College London and the author of Strategy: A History.