A Wonder to Behold: Craftsmanship and the Creation of Babylon's Ishtar Gate (Hardcover) 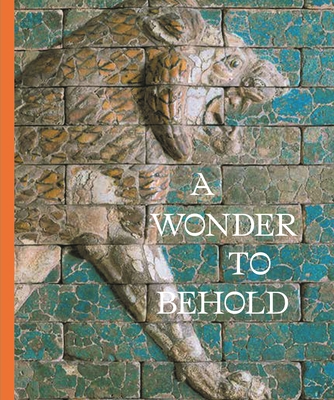 A Wonder to Behold: Craftsmanship and the Creation of Babylon's Ishtar Gate (Hardcover)

An in-depth and beautifully illustrated look at one of the most revered works of antiquity, the Ishtar Gate of ancient Babylon

In the ancient Near East, expert craftspeople were more than technicians: they numbered among those special members of society who could access the divine. While the artisans' names are largely unknown today, their legacy remains in the form of spectacular artworks and monuments. One of the most celebrated works of antiquity--Babylon's Ishtar Gate and its affiliated Processional Way--featured a dazzling array of colorful beasts assembled from molded, baked, and glazed bricks. Such an awe-inspiring structure demanded the highest level of craft; each animal was created from dozens of bricks that interlocked like a jigsaw. Yet this display of technical and artistic skill also served a ritual purpose, since the Gate provided a divinely protected entrance to the sacred inner city of Babylon. A Wonder to Behold explores ancient Near Eastern ideas about the transformative power of materials and craftsmanship as they relate to the Ishtar Gate. This beautifully illustrated catalogue accompanies an exhibition at New York University's Institute for the Study of the Ancient World. Essays by archaeologists, art historians, curators, conservators, and text specialists examine a wide variety of artifacts from major American and European institutions. Contributors include Anastasia Amrhein, Heather Baker, Jean-Fran ois de Lap rouse, Eduardo Escobar, Anja F gert, Sarah Graff, Helen Gries, Elizabeth Knott, Katherine Larson, Beate Pongratz-Leisten, Shiyanthi Thavapalan, and May-Sarah Ze in. Distributed for the Institute for the Study of the Ancient World at New York University Exhibition Schedule
Institute for the Study of the Ancient World, New York University
Exhibition Dates: November 6, 2019-May 24, 2020
Anastasia Amrhein is an art historian specializing in the ancient Near East and a PhD candidate at the University of Pennsylvania. Clare Fitzgerald is associate director for exhibitions and gallery curator at the Institute for the Study of the Ancient World at New York University. Elizabeth Knott is a historian specializing in the textual and visual remains of the ancient Near East.