When Eero Met His Match: Aline Louchheim Saarinen and the Making of an Architect (Hardcover) 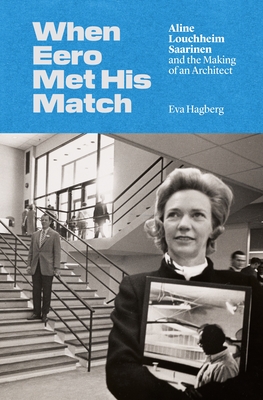 When Eero Met His Match: Aline Louchheim Saarinen and the Making of an Architect (Hardcover)

Aline B. Louchheim (1914-1972) was an art critic on assignment for the New York Times in 1953 when she first met the Finnish-American architect Eero Saarinen. She would become his wife and the driving force behind his rise to critical prominence. When Eero Met His Match draws on the couple's personal correspondence to reconstruct the early days of their thrilling courtship and traces Louchheim's gradual takeover of Saarinen's public narrative in the 1950s, the decade when his career soared to unprecedented heights. Drawing on her own experiences as an architecture journalist on the receiving end of press pitches and then as a secret publicist for high-end architects, Eva Hagberg paints an unforgettable portrait of Louchheim while revealing the inner workings of a media world that has always relied on secrecy, friendship, and the exchange of favors. She describes how Louchheim codified the practices of architectural publicity that have become widely adopted today, and shows how, without Louchheim as his wife and publicist, Saarinen's work would not have been nearly as well known. Providing a new understanding of postwar architectural history in the United States, When Eero Met His Match is both a poignant love story and a superb biographical study that challenges us to reconsider the relationship between fame and media representation, and the ways the narratives of others can become our own.
Eva Hagberg teaches in the Language and Thinking Program at Bard College and at the Graduate School of Architecture, Planning, and Preservation at Columbia University. Her books include How to Be Loved: A Memoir of Lifesaving Friendship and Nature Framed: At Home in the Landscape. She lives in Brooklyn.