Restarting the Future: How to Fix the Intangible Economy (Hardcover) 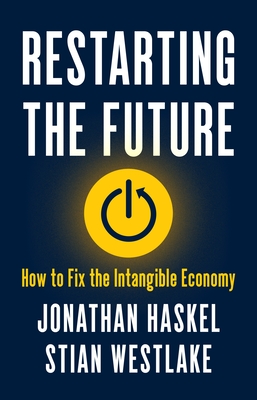 Restarting the Future: How to Fix the Intangible Economy (Hardcover)

From the acclaimed authors of Capitalism without Capital, radical ideas for restoring prosperity in today's intangible economy

The past two decades have witnessed sluggish economic growth, mounting inequality, dysfunctional competition, and a host of other ills that have left people wondering what has happened to the future they were promised. Restarting the Future reveals how these problems arise from a failure to develop the institutions demanded by an economy now reliant on intangible capital such as ideas, relationships, brands, and knowledge. In this groundbreaking and provocative book, Jonathan Haskel and Stian Westlake argue that the great economic disappointment of the century is the result of an incomplete transition from an economy based on physical capital, and show how the vital institutions that underpin our economy remain geared to an outmoded way of doing business. The growth of intangible investment has slowed significantly in recent years, making the world poorer, less fair, and more vulnerable to existential threats. Haskel and Westlake present exciting new ideas to help us catch up with the intangible revolution, offering a road map for how to finance businesses, improve our cities, fund more science and research, reform monetary policy, and reshape intellectual property rules for the better. Drawing on Haskel and Westlake's experience at the forefront of finance and economic policymaking, Restarting the Future sets out a host of radical but practical solutions that can lead us into the future.
Jonathan Haskel is professor of economics at Imperial College Business School and an external member of the Monetary Policy Committee of the Bank of England. Twitter @haskelecon Stian Westlake is chief executive of the Royal Statistical Society. Twitter @stianwestlake They are the authors of Capitalism without Capital: The Rise of the Intangible Economy (Princeton) and cowinners of the Indigo Prize.