Fixing Social Security: The Politics of Reform in a Polarized Age (Hardcover) 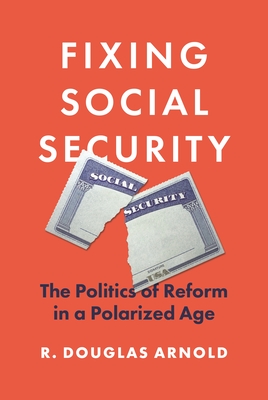 Fixing Social Security: The Politics of Reform in a Polarized Age (Hardcover)

Since its establishment, Social Security has become the financial linchpin of American retirement. Yet demographic trends--longer lifespans and declining birthrates--mean that this popular program now pays more in benefits than it collects in revenue. Without reforms, 83 million Americans will face an immediate benefit cut of 20 percent in 2034. How did we get here and what is the solution? In Fixing Social Security, R. Douglas Arnold explores the historical role that Social Security has played in American politics, why Congress has done nothing to fix its insolvency problem for three decades, and what legislators can do to save it. What options do legislators have as the program nears the precipice? They can raise taxes, as they did in 1977, cut benefits, as they did in 1983, or reinvent the program, as they attempted in 2005. Unfortunately, every option would impose costs, and legislators are reluctant to act, fearing electoral retribution. Arnold investigates why politicians designed the system as they did and how between 1935 and 1983 they allocated--and reallocated--costs and benefits among workers, employers, and beneficiaries. He also examines public support for the program, and why Democratic and Republican representatives, once political allies in expanding Social Security, have become so deeply polarized about fixing it. As Social Security edges closer to crisis, Fixing Social Security offers a comprehensive analysis of the political fault lines and a fresh look at what can be done--before it is too late.
R. Douglas Arnold is the William Church Osborn Professor of Public Affairs Emeritus at Princeton University. His books include Congress, the Press, and Political Accountability (Princeton), The Logic of Congressional Action, and Framing the Social Security Debate.