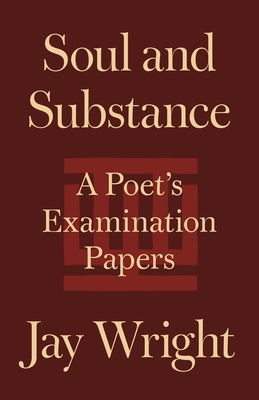 A collection of new and startlingly original essays from an acclaimed poet, essayist, and playwright

Jay Wright is widely recognized as one of the most important American poets of the past half century. But in recent years, he has also written a series of unconventional essays that he calls "examination papers," which he defines as "designated inquiries to myself." In these linked essays, most of which resemble prose-poems, with only a few lines set on each page, Wright explores abiding artistic and philosophical concerns, including language, aesthetic form, knowledge, time, and death. Soul and Substance presents these pieces for the first time. Drawing on everything from African mythology to mathematical axioms, Wright reflects on a wide range of topics: the difficulties of defining and confronting death; the challenge of transcending one's own consciousness; the nature of rhythm and the structure of space; and the relationship among the self, the body, and the material world. Throughout, the book examines the limits of human knowledge and the implications of our always imperfect understanding. Experimental and original, Soul and Substance is an important addition to the work of a major writer.
Jay Wright is a poet, playwright, and essayist. His books include Transfigurations: Collected Poems, The Prime Anniversary, and The Dramatic Radiance of Number. His many awards include the Bollingen Prize for American Poetry, the Lannan Literary Award for Poetry, and a MacArthur Fellowship.