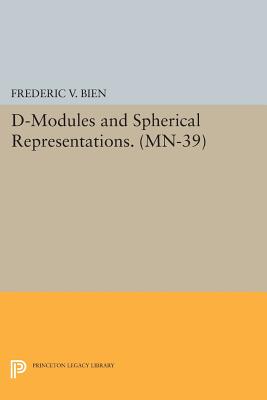 The theory of D-modules deals with the algebraic aspects of differential equations. These are particularly interesting on homogeneous manifolds, since the infinitesimal action of a Lie algebra consists of differential operators. Hence, it is possible to attach geometric invariants, like the support and the characteristic variety, to representations of Lie groups. By considering D-modules on flag varieties, one obtains a simple classification of all irreducible admissible representations of reductive Lie groups. On the other hand, it is natural to study the representations realized by functions on pseudo-Riemannian symmetric spaces, i.e., spherical representations. The problem is then to describe the spherical representations among all irreducible ones, and to compute their multiplicities. This is the goal of this work, achieved fairly completely at least for the discrete series representations of reductive symmetric spaces. The book provides a general introduction to the theory of D-modules on flag varieties, and it describes spherical D-modules in terms of a cohomological formula. Using microlocalization of representations, the author derives a criterion for irreducibility. The relation between multiplicities and singularities is also discussed at length.

Originally published in 1990. The Princeton Legacy Library uses the latest print-on-demand technology to again make available previously out-of-print books from the distinguished backlist of Princeton University Press. These editions preserve the original texts of these important books while presenting them in durable paperback and hardcover editions. The goal of the Princeton Legacy Library is to vastly increase access to the rich scholarly heritage found in the thousands of books published by Princeton University Press since its founding in 1905.