For A Sign And A Wonder: Handy Scriptural References To Aid The Newly Awakened Israelite (Paperback) 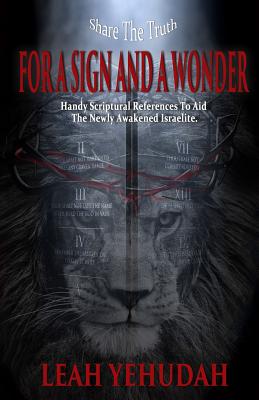 For A Sign And A Wonder: Handy Scriptural References To Aid The Newly Awakened Israelite (Paperback)

For A Sign And A Wonder is a handy reference and witnessing tool for the newly awakened Israelite. This topical compilation of scriptures includes canonical (The Bible) and non-canonical sources like the Apocrypha, and the Pseudepigrapha as well as relevant historical and contemporary citations.

Though many books in the Apocrypha and Pseudepigrapha have been dismissed by "mainstream Christianity," a number of them exist as canon in the Ethiopian, Coptic, Syriac, and Armenian bibles.

Explore the many clues that point to the identity of Jacob's true bloodline. Sift through the myriad of prophecies referencing the great diaspora where The Most High scattered His people (who remain in captivity) across the four corners of the world. Discover the glorious revelation of the "hidden ones," who were once thought to have disappeared forever. Pore over The Most High's many prophecies and promises to restore, regather, glorify, and exalt His chosen ones before the entire world Understand the enduring Israelite condition, and what we must do to "reverse the curse."

Prophecy is unfolding before our eyes. Generations have longed to witness what we're seeing now. If there's a friend, acquaintance, loved one, or even a stranger you want to reach, this arsenal of relevant scriptures will help you take that first step.

Remember The Most High's promise:

"I will bless those who bless you, and curse those who curse you..."

In sharing the truth of the chosen people's true identity, you're not only blessing Judah and The House of Israel, you're delighting our Heavenly Father.