The New Communitarians and the Crisis of Modern Liberalism (Hardcover) 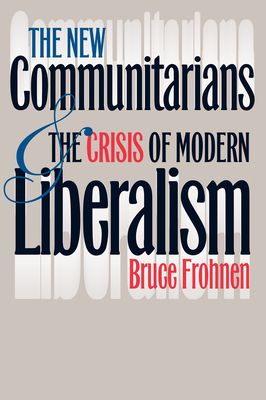 The New Communitarians and the Crisis of Modern Liberalism (Hardcover)


Special Order—Subject to Availability
This book critiques and challenges the rise of communitarian thought in America. With a skeptical eye, Bruce Frohnen seeks to cut through the communitarians' rhetoric of community, commitment, and spirituality to reveal the egalitarian materialism at the core of their enterprise. Frohnen argues that the new communitarians--exemplified by political philosophers Charles Taylor and William Galston, as well as popularizers like Bill Clinton, Amitai Etzioni, Garry Wills, Mario Cuomo, and Robert Bellah--are actually old liberals trying to salvage political legitimacy by advocating allegiance to the sacred state rather than the traditions of family, church, and community. Frohnen chastises the communitarians for confiscating the language of religion for purely political ends-a calculating attempt to rescue their thinly disguised liberalism from its own morally bankrupt decline. In effect, he criticizes what he perceives as the communitarians' misguided attempts to displace religion from the center of moral education and political life in the quest for an unachievable secular utopia. Their sacramental politics seek to harness awe and the impulse to worship in the service of the state. Frohnen, however, suggests that this effort has only served to further damage the relationship between tradition and belief on which our society is truly based. Like the old liberals, the new communitarians continue to distort liberalism's original enterprise of freeing individuals from the constraints of tyrannical government. Instead, they advocate increasing government constraints to protect us from poverty and other material conditions that prevent us from leading our own version of the good life. Unfortunately, Frohnen contends, this attempt undermines the soul of self-reliance that provides the virtuous foundation of liberal economics, and, indeed, any good life lived in common. Like Frohnen's first book, Virtue and the Promise of Conservatism, this volume is a tempered but resolute defense of traditional values and institutions confronting the rationalistic and materialistic excesses of a faithless age. In the dark night of the American soul, it flashes a warning to us that the bridge is out and we had better turn back or risk plunging into blackwater chaos.