Macarthur's Coalition: US and Australian Military Operations in the Southwest Pacific Area, 1942-1945 (Hardcover) 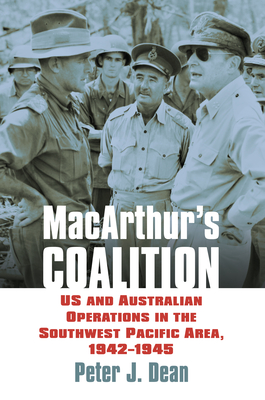 Macarthur's Coalition: US and Australian Military Operations in the Southwest Pacific Area, 1942-1945 (Hardcover)


Special Order—Subject to Availability
From 1942-1945 the Allies' war in the Southwest Pacific was effectively a bilateral coalition between the United States and Australia under the command of General Douglas MacArthur. By charting the evolution of the military effectiveness of the US-Australian alliance, MacArthur's Coalition puts the relationship between the United States and Australia at the center of the war against Japan. Drawing on new primary source material, Peter J. Dean has written the first substantial book-length treatment of the coalition as a combined military force. This expansive and ambitious book provides a fresh perspective on the Pacific War by providing a close-up, in-depth account of operations in the Southwest Pacific from the Kokoda Trail campaign to the reconquest of the Philippines and Borneo. Dean's work takes the reader deep into the key military headquarters in the Southwest Pacific and reveals the discussions, debates, and arguments between key commanders and staff officers during the course of planning and waging a monumental conflict. Drawing upon archival records across three continents, Dean brings the qualities of these senior officers to life by exploring the critical importance of personalities and leadership in overcoming cultural, doctrinal, and organizational divides in the largely unequal alliance. Set against the practicalities of fighting a fanatical enemy in some of the most inhospitable terrain in the war, his book shows how, despite these divides and MacArthur's difficult personality, the US-Australian coalition was able to forge a highly effective and ultimately triumphant fighting machine. With its unprecedented view of the joint nature of operations in the Southwest Pacific and its focus on frontline commanders and units in forging a successful fighting force, MacArthur's Coalition illuminates a critical aspect of the Allied victory in World War II.