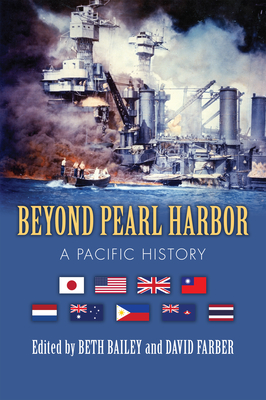 
Special Order—Subject to Availability
In the United States, December 7, 1941, may live in infamy, in President Franklin D. Roosevelt's phrase, but for most Americans the date's significance begins and ends with the attack on Pearl Harbor. On December 8 (December 7 on the other side of the International Date Line) Japanese military forces hit eight major targets, all but one on western colonial possessions and military outposts in the Pacific: Kota Bharu on the northeast coast of Malaya (now Malaysia); Thailand, the one site not claimed by a western power; Pearl Harbor, O'ahu; Singapore, key to the defense of Britain's Asian empire; Guam, the only island in the Mariana chain not controlled by Japan; Wake Island; Hong Kong; and the Philippines. Told from multiple perspectives, the stories of these attacks reveal the arc of imperialism, colonialism, and burgeoning nationalism in the Pacific world. In Beyond Pearl Harbor renowned scholars hailing from four continents and representing six nations reinterpret the meaning of the coordinated, and devastating, attacks of December 7/8, 1941. Working from a variety of angles, they revise and expand, to an unprecedented extent, what we understand about these events--in particular, how Japan's overwhelming, if short-lived, victories contributed to emerging solidarities and nationalist identities within and across Pacific societies. In their essays we see how various elite actors incorporated the attacks into new regimes of knowledge and expertise that challenged and displaced existing hierarchies. Extending far beyond Pearl Harbor, the events of December 1941, as we see in this volume, are part of a story of clashing empires and anti-colonial visions--a story whose outcome, even now, remains to be seen.