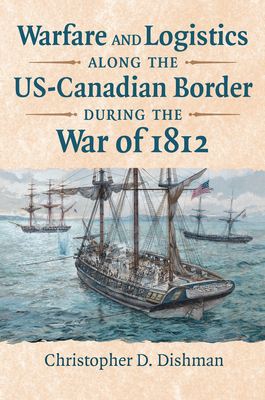 
Special Order—Subject to Availability
Christopher D. Dishman provides a comprehensive study of the combat that took place along the US-Canadian frontier during the War of 1812, where the bulk of the war's fighting took place. The border region, which included the St. Lawrence River and Great Lakes, served as Britain's supply line to receive and distribute supplies. The region's size, varied topography, and undeveloped infrastructure, however, made this a challenging environment to move troops and supplies to the battlefield. Few large settlements or all-season roads intersected the region, so reinforcements, food, or ammunition could be weeks or months away from their destination. Dishman analyzes the critical role of logistics and explains how the safe and timely arrival of soldiers, shipwrights, cannons, and other provisions often dictated a battle's outcome before a shot was fired. The northern frontier between the United States and the British Empire remained the focus of US military efforts throughout the war. The president and Congress declared war on Britain to force its leaders to negotiate on bilateral issues, and America's only viable offensive military option was to invade Canada. Victory for either side depended on enough men and materials arriving promptly at a remote outpost or dockyard from distant supply depots. Canada could not produce many of its needed items in-country, so America retained a distinct advantage with its indigenous metalworks and iron industries. These components proved critical in a war that depended on the rushed construction of vessels that could outgun their enemy. Warfare and Logistics along the US-Canadian Border during the War of 1812 is a deeply researched and highly readable assessment of the successes and failures of military operations from 1812 to 1814. The book also highlights the interdependencies between land and naval operations in the war and illuminates the influence of changing military and political factors on Britain's and America's military objectives. Warfare and Logistics along the US-Canadian Border during the War of 1812 also evaluates the performance of the military and civilian officers as Dishman brings a distant war's battles to life with stories from participating soldiers and civilians.