Barred by Congress: How a Mormon, a Socialist, and an African American Elected by the People Were Excluded from Office (Hardcover) 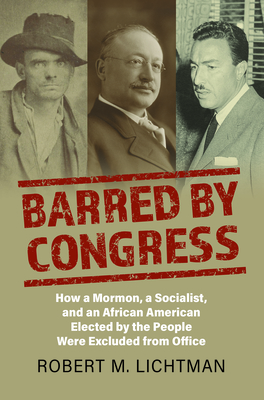 Barred by Congress: How a Mormon, a Socialist, and an African American Elected by the People Were Excluded from Office (Hardcover)


In Stock—Click for Locations
In Barred by Congress: How a Mormon, a Socialist, and an African American Elected by the People Were Excluded from Office Robert M. Lichtman provides a definitive history of congressional exclusion and expulsion cases. Lichtman offers a timely investigation of the vital constitutional issues, debated since the nation's founding, concerning permissible and impermissible grounds for excluding a member-elect or expelling a member from Congress. Barred by Congress begins with an exhaustive review of the numerous congressional exclusion and expulsion cases in the eighteenth and nineteenth centuries before focusing on the stories of the last three members-elect to be excluded from Congress: a Mormon, a Socialist, and an African American--each an outsider in American politics--excluded notwithstanding election by the voters. Lichtman illuminates each of these three remarkable individuals with a detailed biographical sketch. Brigham H. Roberts was a Utah Mormon whose exclusion from the House of Representatives in 1900 was fueled by a nationwide anti-Mormon campaign waged by William Randolph Hearst and his newspaper empire, a controversy centered on the issue of polygamy. Victor L. Berger, a Socialist Party leader and editor of an antiwar Milwaukee newspaper during World War I, was elected to the House despite the efforts of the Wilson administration to derail his campaign by indicting him under the Espionage Act; he was excluded in 1919 and again in 1920. Adam Clayton Powell Jr. was a Baptist minister and civil rights advocate who represented the Harlem neighborhood of New York City in the House of Representatives from 1945 until his exclusion in 1967. In Powell v. McCormack, the Supreme Court ruled that Powell's exclusion by the House violated the Constitution, a decision that, a half century later, remains established law but still does not provide complete assurance that the people will be able to (in Alexander Hamilton's words) "choose whom they please to govern them.