Secret Houses of the Cotswolds (Hardcover) 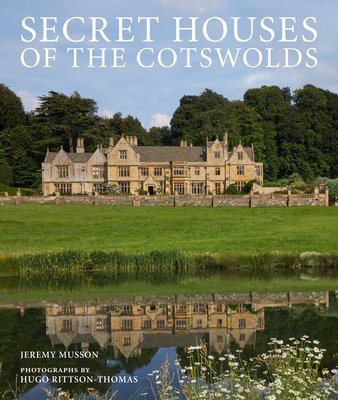 Secret Houses of the Cotswolds (Hardcover)


Special Order—Subject to Availability
A personal tour of twenty of the UK’s most beguiling houses in this much loved area of western England.

Author and architectural historian, Jeremy Musson, and Cotswolds-based photographer Hugo Rittson Thomas, offer privileged access to twenty houses, from castles and manor houses, as well as eighteenth- and nineteenth-century mansions, revealing their history, architecture and interiors, in the company of their devoted owners.

In the footsteps of artists and designers including Humphry and George Repton, and Victorian visionary, William Morris, who inspired the arts and crafts movement, and others such as Detmar Blow, Norman Jewson, Clough Williams-Ellis
and Oliver Hill, we find a series of fascinating country houses of different sizes and atmospheres, which have shaped the English identity. Each house has their own story, but their distinctive honey-coloured stone walls, set amongst rolling
hills, in different ways express the ideals of English life.

Most of the houses included here are privately owned and not usually open to the public. In this beautifully produced book, they can now be enjoyed through the eyes of their owners, as well as an experienced architectural historian, and an award-winning photographer.

Jeremy Musson is an architectural historian, writer and broadcaster who worked for Country Life for twelve years, first as Architectural Writer and then as Architectural Editor. He has a particular enthusiasm for the late-seventeenth-century and early-eighteenth-century English county houses and has visited all the surviving works of Vanbrugh. He is passionate about engaging a wider audience in the marvels and spectacles of the English country house tradition. A former assistant curator for the National Trust in East Anglia, he also presented the popular BBC2 series, The Curious House Guest. He is the author of The Country Houses of Sir John Vanbrugh, The English Manor House: from the Archives of Country Life and How to Read a House. Born in London in 1965, he now lives with his family in Cambridge.

Hugo Rittson Thomas is one of the UK's leading portrait photographers. He began his career in the art world, studying at Central St. Martin's and Goldsmiths University of London, and took part in the landmark exhibition Temple of Diana alongside Tracey Emin at The Blue Gallery in 1999. Rittson Thomas photographed Her Majesty The Queen and members of the Royal Household for his book The Queen’s People which was published by Assouline in 2016. He has photographed a number of books for Frances Lincoln including The Secret Gardeners and Secret Gardens of the Cotswolds.

'Some real gems, including a seventeenth-century manor house and a remodelled medieval moated house. The owners of each take their role as guardians seriously.'—House & Garden

‘Unless you’re lucky enough to be on dinner party terms with the owners, there are many historic treasures you’re unlikely to ever peer behind the doors of, but thanks to this beautiful book all that has changed. Sumptuous full-colour images lovingly laid out across spreads to great effect, showing everything from seeping lawns to personal, quirky details. Just gorgeous.’—Cotswold Life

'Any lover of the Costwolds would find this book a very attractive and informative addition to their library.'—Historic House