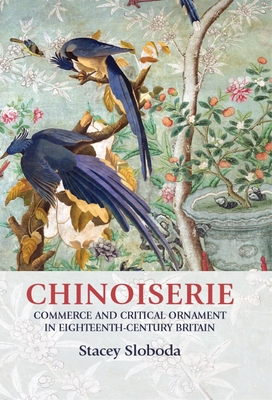 In a critical reassessment of chinoiserie, a style both praised and derided for its triviality, prettiness, and ornamental excesses, Stacey Sloboda shows that it was no mute participant in eighteenth-century global consumer culture, but was instead a critical commentator on that culture. Analysing ceramics, wallpaper, furniture, garden architecture and other significant examples of British and Chinese design, this book takes an object-focused approach to studying the cultural phenomenon of the 'Chinese taste' in eighteenth-century Britain.

Demonstrating that the ornamental language of chinoiserie was mutually developed by Chinese and European artists, designers, craftspeople and merchants, this book argues against the notion that it was the product of European fantasy and ignorance about Chinese culture. Rather, chinoiserie was a product of cross-cultural exchange of European and Chinese responses to expanding commercial markets and changing ideas about design.

As a popular, commercial style whose subject was commerce, chinoiserie offered new groups of consumers opportunities for aesthetic agency. Women, long associated with the style, were one such group, and this book also pays attention to the role of men such as merchants and craftsmen in its development.

Taking an innovative look at art and cultural history, the book is essential reading for anyone interested in analysis of design and the decorative arts in eighteenth-century Britain. Students and scholars of art history, material culture, eighteenth-century studies and British history will find a novel approach to studying the decorative arts and a forceful argument for their critical capacities.