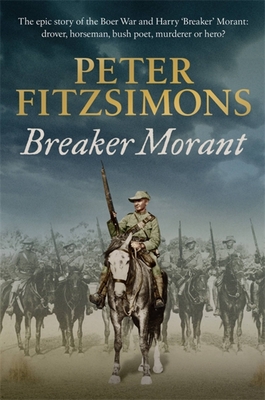 Most Australians have heard of the Boer War and of Harry 'Breaker' Morant, a figure who rivals Ned Kelly as an archetypal Australian folk hero. But Morant was a complicated man. Born in England and immigrating to Queensland in 1883, he established a reputation as a rider, polo player and poet who submitted ballads to The Bulletin and counted Banjo Paterson as a friend. Travelling on his wits and the goodwill of others, Morant was quick to act when appeals were made for horsemen to serve in the war in South Africa. He joined up, first with the South Australian Mounted Rifles and then with a South African irregular unit, the Bushveldt Carbineers.

The adventure would not go as Breaker planned. In October 1901 Lieutenant Harry Morant and two other Australians, Lieutenants Peter Handcock and George Witton, were arrested for the murder of Boer prisoners. Morant and Handcock were court-martialled and executed in February 1902 as the Boer War was in its closing stages, but the debate over their convictions continues to this day.

With his masterful command of story, Peter FitzSimons takes us to the harsh landscape of southern Africa and into the bloody action of war against an unpredictable force using modern commando tactics. The truths FitzSimons uncovers about 'the Breaker' and the part he played in the Boer War are astonishing - and finally we will know if the Breaker was a hero, a cad, a scapegoat or a criminal.

Peter FitzSimons AM is Australia's bestselling non-fiction writer, and for the past 35 years has also been a journalist and columnist with the SYDNEY MORNING HERALD and the SUN-HERALD.

He is the author of a number of highly successful books, including BREAKER MORANT, BURKE AND WILLS, MONASH'S MASTERPIECE, KOKODA, NED KELLY and GALLIPOLI, as well as biographies of such notable Australians as Sir Douglas Mawson, Nancy Wake and Nick Farr-Jones. His passion is to tell Australian stories, our own stories: of great men and women, of stirring events in our history.

Peter grew up on a farm north of Sydney, went to boarding school in Sydney and attended Sydney University. An ex-Wallaby, he also lived for several years in rural France and Italy, playing rugby for regional clubs. He and his wife Lisa Wilkinson AM - journalist, magazine editor and television presenter - have three children; they live in Sydney.

Fans of the author's campfire yarn-style of telling Australian history will find much to like in this latest book.—Jeff Maynard, NATIONAL [PRINT], Herald Sun, [AUDIENCE: 306,571, ASR: AUD 12,877]