The Approaching Storm: Roosevelt, Wilson, Addams, and Their Clash Over America's Future (Hardcover) 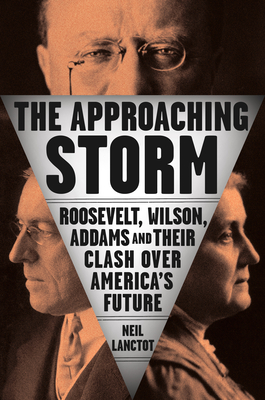 The Approaching Storm: Roosevelt, Wilson, Addams, and Their Clash Over America's Future (Hardcover)

The fascinating story of how the three most influential American progressives of the early twentieth century split over America’s response to World War I.

In the early years of the twentieth century, the most famous Americans on the national stage were Theodore Roosevelt, Woodrow Wilson, and Jane Addams: two presidents and a social worker. Each took a different path to prominence, yet the three progressives believed the United States must assume a more dynamic role in confronting the growing domestic and international problems of an exciting new age.

Following the outset of World War I in 1914, the views of these three titans splintered as they could not agree on how America should respond to what soon proved to be an unprecedented global catastrophe. The Approaching Storm is the story of three extraordinary leaders and how they debated, quarreled, and split over the role the United States should play in the world.

By turns a colorful triptych of three American icons who changed history and the engrossing story of the roots of World War I, The Approaching Storm is a surprising and important story of how and why the United States emerged onto the world stage.
Neil Lanctot is an award-winning historian and author. He has written several books, including Campy: The Two Lives of Roy Campanella and Negro League Baseball: The Rise and Ruin of a Black Institution. He lives with his wife in West Chester, Pennsylvania.
Praise for The Approaching Storm:

“Thought-provoking…Lanctot offers a well-written presentation … which general readers might compare to Justus Doenecke’s Nothing Less Than War and G. J. Meyer’s The World Remade.” —Library Journal

“Lanctot shifts smoothly among these pivotal personalities and makes the details of this broadly ranging history accessible to all sorts of readers….Lanctot’s focus on the roles of the titanic figures contributes a unique and valuable view of America’s place in the Great War’s genesis.” —Booklist, STARRED REVIEW

“Lively and enthralling…The real strength of The Approaching Storm is not its colorful and well-drawn supporting cast but the three pivotal figures at its center, who provide a remarkably revealing lens for viewing the unrelenting internecine conflicts that roiled the American home front during World War I and well into the years beyond.” —New York Journal of Books

“The Approaching Storm brings the reader on a journey whose destination is preordained. However, the people and circumstances that guide the way form the crux of a brilliantly told history. The heart of the book consists of the three robust personalities caught in the middle of a rapidly escalating situation. Author Neil Lanctot relates the past with elegance and flair.” —Seattle Book Review

“Accessible and engaging…The author is at his best when he writes about Addams, whose pacifism seems a logical extension of her commitment to social justice and her faith in the meliorative power of expertise. His portraits of Roosevelt and Wilson are less analytically rich, but they’re still incisive.…Lanctot’s boldest and most provocative intervention may be his decision to reframe the wartime intervention debate as a three-cornered contest.…[his] book reminds us that the seemingly inevitable transformation of the United States into a great military power was not, in fact, inevitable at all.” —Not Even Past podcast

“A meticulously researched examination of the dynamic among three important American newsmakers of the early 20th century.” ⁠—Kirkus Review

“A fresh, character-driven look at the debate over America’s entry into World War I…a rich and rewarding portrait of a crucial turning point in American history.” —Publishers Weekly

“How do you awaken a giant? In this crisply written and richly researched history, Neil Lanctot narrates a dramatic story of how America entered into World War I despite President Wilson’s profound reservations and the fierce opposition of the popular international women’s peace movement. It is a significant contribution to the literature on the Great War.” —Joel Paul, author of the bestselling Without Precedent: Chief Justice John Marshall and His Times