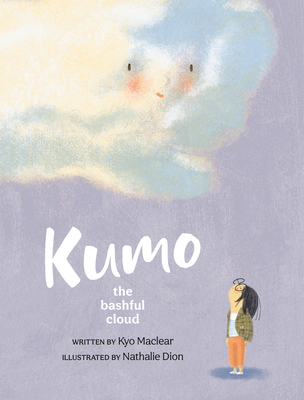 
On Our Shelves Now at:
The uplifting journey of a bashful cloud ("kumo" in Japanese) who discovers the rewards of feeling seen.

Kumo is a cloud whose only wish is to float unseen. When she’s assigned cloud duty for the day, she feels overwhelmed by self-doubt and her fear of being noticed. But after learning that closing your eyes isn’t a good solution to your troubles, Kumo pulls her fluff together and does her duties — drifting, releasing rain and providing shelter — meeting some new friends along the way and inspiring the imagination (and capturing the heart) of a small daydreamer like her.

Kyo Maclear’s sweetly humorous and lyrical parable about shyness, vividly brought to life by Nathalie Dion’s ethereal illustrations, is an affirmation of the pleasures of community and the confidence that can arise from friendship and visibility.
KYO MACLEAR is an award-winning writer whose books for children and adults have been translated into fifteen languages and published in over twenty countries. An official member of the Cloud Appreciation Society, Kyo is fond of quiet nooks and long books. She generally avoids performing, but loves the performers in her life, including and especially the three musicians with whom she shares a house in Toronto, Ontario.

NATHALIE DION is an acclaimed children's book and editorial illustrator. She received a Governor General's Award nomination for her work in Valérie Fontaine's Le grand méchant loup dans ma maison, published in English as The Big Bad Wolf in My House. Nathalie’s beloved puffy white dog, along with the breathtaking cloud paintings of the modern era, inspired her to illustrate this book. She lives in Montreal, Quebec.
"Dion’s vivid illustrations, inspired by Impressionist paintings, reflect the sky’s expressiveness. . . . Kumo will impart a new appreciation for clouds and show readers how it can sometimes be frightening to step into the world, then [reassure] them that others are willing to help when we overcome our bashfulness." —STARRED REVIEW, Quill & Quire

"[F]or young readers who may themselves feel anxious about finding their place and making friends . . . [a] quiet, satisfying tale about being brave enough to take that first step." —Kirkus Reviews

"An excellent . . . read-aloud to help children understand their own reticence about being seen, this story also shows the many ways they can be present, as individuals or part of a group." —School Library Journal

"Maclear writes a tale as light and lilting as its cloud hero. . . . Quiet, sweeping panoramas, often in sunrise colors, nurture the sense of calm that comes with broad perspectives and new connections. . . . [a] memorable story about coming into one's own." —Publishers Weekly

"After reading this book, young and old readers alike are sure to gain an even greater appreciation for clouds. Every time we look up at the sky, we’ll likely think of Kumo." —Montreal Review of Books