Bibi's Got Game: A Story about Tennis, Meditation and a Dog Named Coco (Hardcover) 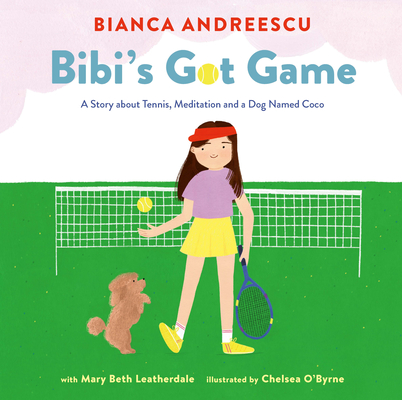 Bibi's Got Game: A Story about Tennis, Meditation and a Dog Named Coco (Hardcover)


In Stock—Click for Locations
In the first picture book written by and based on real-life tennis star Bianca Andreescu, a young athlete learns how to work through life's toughest moments through inner strength and meditation.

From the moment she wakes up, Bibi is very busy. Even before school begins, there are cartwheels to do, world records to break (38 minutes balancing a spoon on your nose), and her dog, Coco, to snuggle. Bibi's mother suggests she try a sport, but nothing feels right. Until she tries tennis. On the court, she feels strong and powerful. Her serve is like lightning, her backhand booms like thunder and her forehand is as fierce as a hurricane. But one day, everything changes when she is injured on the playground. Bibi is heartbroken, sad, frustrated and angry — she decides to quit tennis! But her mother, with a little help from Coco, shows her how to meditate and dispel the self-doubt and negativity. Bibi learns to focus on all the things that make her grateful and happy. And when her body is ready to go back to tennis, so is her mind. "Now every morning, I picture myself strong and powerful on the court. Just me and the fuzzy ball."
BIANCA ANDREESCU is a Canadian professional tennis player who grew up in Romania and Mississauga. With a career-high ranking of No. 4 in the world, Bianca set a new record as the highest-ranked Canadian in the history of the Women’s Tennis Association (WTA). Andreescu began her historic 2019 season by capturing the BNP Paribas Open title as the first wild-card winner in tournament history. She went on to defeat Serena Williams to win both the US Open and the Rogers Cup, becoming the first Canadian tennis player to win a Grand Slam singles title, and the first to win the Rogers Cup in 50 years. Andreescu is also the first player to win a Grand Slam singles title as a teenager since 2006.

CHELSEA O'BYRNE is an author, illustrator and art teacher based in Vancouver, British Columbia. She graduated in 2016 from Emily Carr University of Art + Design with a B.F.A. in Illustration. Since then, she has worked in editorial illustration and children’s books. Chelsea uses a combination of many different materials to make her illustrations, including gouache, watercolor, colored pencil, pastel, graphite, ink and markers. She is currently working on her fifth picture book.
"It's a book that might encourage kids to head outside for some physical exercise — maybe even pick up a racket and one of those fuzzy yellow tennis balls." —Montreal Gazette