Armstrong Special Edition : The Adventurous Journey of a Mouse to the Moon (Mouse Adventures) (Hardcover) 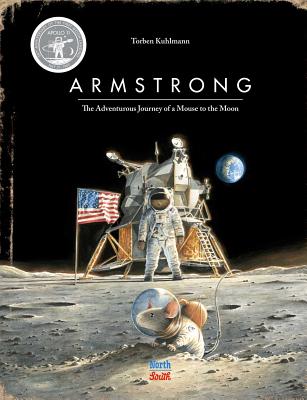 Armstrong Special Edition : The Adventurous Journey of a Mouse to the Moon (Mouse Adventures) (Hardcover)


On Our Shelves Now at:
To celebrate the 50th anniversary of the moon landing, this stunning picture book is now available in a special limited edition complete with a new cover, an introduction by the author, and three spreads of new art depicting the Apollo 11 mission and the moon landing!

Torben Kuhlmann transports readers to the moon and beyond in Armstrong—The Adventurous Journey of a Mouse to the Moon, where dreams are determined only by the size of one’s imagination and the biggest innovators are the smallest of all.

“‘One Small Step for a Mouse’ indeed.”—Kirkus Reviews, Starred Review

“This beautifully illustrated story is a feast for mind and eyes and a strong selection to complement STEAM curricula.”—School Library Journal, Starred Review

Torben Kuhlmann studied illustration and communications design at the Hamburg University of Applied Science, with book illustration as his main subject. In June 2012 he finished his studies by writing and illustrating the children’s book Lindbergh—The Tale of a Flying Mouse. This was his first picture book, and within a very short time it became a best seller. It has now been translated into more than thirty languages. Further mouse adventures followed with Armstrong (2016), Edison (2018), and Einstein (2021), all of which have achieved cult status.
The scientific notes at the end of the tale give those inquisitive minds any answers they were still missing and provide some more details into the Apollo mission. A great way to introduce students to the history behind the first man on the moon.
— School Library Journal