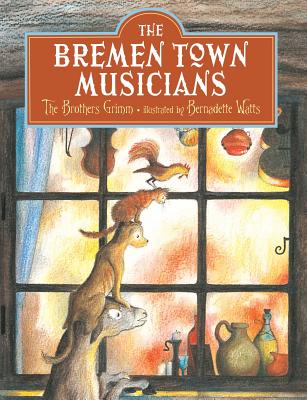 
In Stock—Click for Locations
A Brothers Grimm story about friendship and persistence, illustrated by the legendary European artist Bernadette Watts.

When a donkey, a dog, a cat, and a rooster are no longer wanted by their masters, they decide to run away and become musicians in Bremen Town. There they discover a warm little cabin, but find that robbers occupy it! Will the four friends plan to scare the robbers away work?
Jacob and Wilhelm Grimm were born in 1785 and 1786 near Frankfurt, Germany. In their early twenties, they began the linguistic studies that would culminate in their collected editions of folk- and fairy tales. They got their stories from peasants and villagers, and sometimes from already-published works from other cultures. Jacob did much of the research; Wilhelm put the stories into literary form.

Bernadette Watts, known throughout Europe simply as Bernadette, has illustrated many dozens of folk- and fairy tales. Born in England, she loved to draw from childhood. She studied at the Maidstone Art School in Kent, UK, and for some time was taught by Brian Wildsmith and David Hockney. Bernadette’s many beautiful books include The Snow Queen and The Little Drummer Boy. Bernadette finds her inspiration in nature. Today she lives and works in Kent. She has been illustrating for NorthSouth Books and NordSüd Verlag since the beginning of her career fifty years ago.
"Watts's soft, more traditional illustrations... are appealingly pretty (in the best sense), representing the animals with sympathy, their defeat of the robbers with some humor, and the setting with a pleasant nostalgia."
— Kirkus Reviews