Adam and His Tuba (Hardcover) 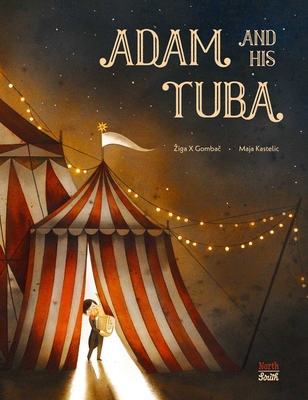 Adam and His Tuba (Hardcover)

A playful book about finding your own path.

Everyone in the circus loves to perform - except for Adam, the very youngest member of the Von Trapeze family.

Only Adam, the youngest of the family, doesn’t show an interest in circus tricks and loud applause. The family is concerned. Where did they go wrong? But one day they are enchanted by the sound of a tuba. And from that day forward, the famous Von Trapeze family circus features a new performer—the one they never expected to be part of the family tradition. And he was a star.

Two of the most famous Slovenian children's book artists take us into the world of the circus in their first joint work. Ziga X Gombac tells the story of Adam in clear, subtle words. With a reduced palette of warm sepia colors, Maja Kastelic lights up the circus world on and off the stage. Together they plead for trust in one's own path and encourage us to take our place in the world.

Ziga X Gombac is from Slovenia, where he studied journalism and worked as a journalist, music editor, and editor-in-chief. He is currently the editor and presenter of the first podcast for youngsters on national radio in Slovenia. He has written numerous books for children and adults, which have won many awards. Storytelling and creating, both in books and at events, is an important part of his life.

Maja Kastelic was born in Slovenia, where she studied painting, philosophy, and visual art theory. For several years she worked as a fresco restorer before devoting herself to illustrating children’s books. Prizes include the White Ravens Award, and her work has been displayed at the Illustrators’ Exhibition in Bologna. Her last book for NorthSouth was Hans Christian Andersen -The Journey of His Life.

Olivia Hellewell is Postdoctoral Research Fellow in Translation Studies and a translator of contemporary Slovene literature.  Olivia is the recipient of two English PEN Translates! Awards, and in 2019 she was awarded first prize in the Asymptote Journal Close Approximations Translation Contest.
"Golds and grays underlie the illustrations, vivified by red stripes, flushed cheeks, pink bouquets, and bursts of light; each panel in this heartwarming tale is full of captivating period details."
— Foreword Reviews, starred review

"Gombac’s clear yet understated nod to the importance of finding one’s own path is sure to strike a note with young readers and may even reassure some caregivers. An entertaining look at a bygone era, brimming with encouragement to follow one’s dreams."
— Kay Weisman

"The only member not taking center stage is the youngest, Adam, who has attempted all of these things without success. While the family gathers to discuss how they can best help him thrive, a magical melody fills the air. The family investigates and finds Adam playing the tuba with unbelievable skill. The family is gobsmacked: “How come we never noticed, or heard him, before now?” “It would appear we were completely caught up in our circus tricks,” says Papa Alexei. It’s a striking thought and one that will resonate with many readers—and hopefully with many caregivers who are trying to turn their children into things they’re not. Once Adam’s talent is discovered, he’s able to join the newly modified family business, proving that the best traditions allow for adaptations so that everyone feels included.

"a lovely addition to libraries seeking unusual international fare in books and those needing books on kids who beat their own drum."
— School Library Journal