Right Thinking for a Culture in Chaos: Responding Biblically to Today's Most Urgent Issues (Paperback) 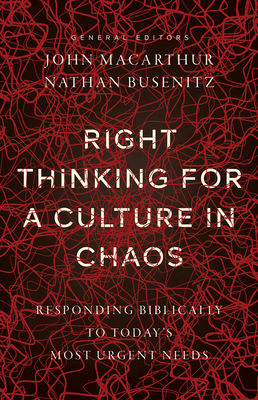 Right Thinking for a Culture in Chaos: Responding Biblically to Today's Most Urgent Issues (Paperback)


Coming Soon—Pre-Order Now
Find the Clarity Only God Provides In an age of moral and spiritual decline, you will inevitably face pressure to view truth as something subjective, shifting, and ultimately unknowable. Yet the Word of God stands in bold contrast against this postmodern sentiment. The absolute truth of Scripture is timeless, extending even to today's most heated controversies. From the bestselling team behind Right Thinking in a World Gone Wrong comes Right Thinking for a Culture in Chaos: a biblical response to contemporary issues like gender identity, government authority, deconstruction of faith, critical race theory, and more. Each chapter illuminates how the principles of God's Word equip you to honor Him in an increasingly corrupt world. You'll also be encouraged by the profound hope of the gospel of Jesus Christ--the only remedy for humanity's brokenness. No matter what society teaches, God's Word cuts through the haze of confusion with the light of truth. Right Thinking for a Culture in Chaos encourages you to ground your convictions in Christ and His all-sufficient Word.
John MacArthur is the pastor-teacher of Grace Community Church in Sun Valley, California; chancellor of The Master's University and Seminary; and featured teacher for the Grace to You media ministry, which reaches millions worldwide. John has also written many bestselling books, including The Gospel According to Jesus. He and his wife, Patricia, have 4 married children and 15 grandchildren. Nathan Busenitz is the executive vice president and provost of The Master's Seminary, located on the campus of Grace Community Church. He also serves as part of the pastoral staff at the church and has written or contributed to numerous books, including Right Thinking in a World Gone Wrong. He and his wife, Beth, have 4 children.