The Einstein Paradox: And Other Science Mysteries Solved By Sherlock Holmes (Paperback) 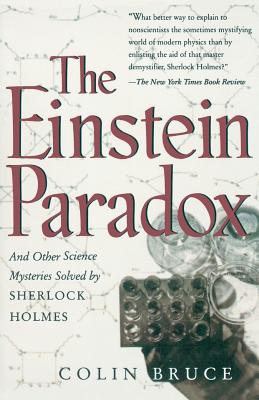 The Einstein Paradox: And Other Science Mysteries Solved By Sherlock Holmes (Paperback)


Not On Our Shelves—Ships in 1-5 Days
In this marvelous book, the reader is introduced to the bizarre concepts of modern physics as the only way to solve a casebook of otherwise impossibly paradoxical crimes. Murder on a royal train. Divers dead of heatstroke at the bottom of an icy sea. An epidemic of insanity among the world's top scientists. This is the story of the great paradigm shifts of science, told as never before: in Sherlock Holmes adventures set amid the grandeur and squalor of Victorian London. Holmes, Watson, and other beloved characters created by Arthur Conan Doyle are challenged by mysteries, each of which hinges on a scientific paradox or principle. Colin Bruce has recreated the atmosphere of the original Sherlock Holmes stories to give a truly compulsive read. You won't even realize you've learned something until it's too late!
Colin Bruce is a physicist and science writer living in Oxford, England. He is an expert in mathematical paradoxes and a lover of mysteries.