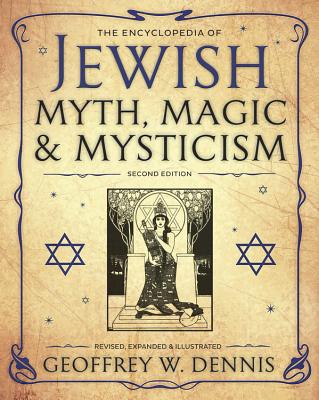 Jewish esotericism is the oldest and most influential continuous occult tradition in the West. Presenting lore that can spiritually enrich your life, this one-of-a-kind encyclopedia is devoted to the esoteric in Judaism--the miraculous and the mysterious. In this second edition, Rabbi Geoffrey W. Dennis has added over thirty new entries and significantly expanded over one hundred other entries, incorporating more knowledge and passages from primary sources.

This comprehensive treasury of Jewish teachings, drawn from sources spanning Jewish scripture, the Talmud, the Midrash, the Kabbalah, and other esoteric branches of Judaism, is exhaustively researched yet easy to use. It includes over one thousand alphabetical entries, from Aaron to Zohar Chadesh, with extensive cross-references to related topics and new illustrations throughout. Drawn from the well of a great spiritual tradition, the secret wisdom within these pages will enlighten and empower you.

"An erudite and lively compendium of Jewish magical beliefs, practices, texts, and individuals...This superb, comprehensive encyclopedia belongs in every serious library."--Richard M. Golden, Director of the Jewish Studies Program, University of North Texas, and editor of The Encyclopedia of Witchcraft: The Western Tradition

"Rabbi Dennis has performed a tremendously important service for both the scholar and the novice in composing a work of concise information about aspects of Judaism unbeknownst to most, and intriguing to all."--Rabbi Gershon Winkler, author of Magic of the Ordinary: Recovering the Shamanic in Judaism

Geoffrey Dennis is rabbi of Congregation Kol Ami in Flower Mound, TX. He is also Lecturer in Kabbalah and rabbinic literature at the University of North Texas. He received his M.HL and was ordained at Hebrew Union College-Jewish Institute of Religion. He also has degrees in Education and Nursing. His articles have appeared in Sh'ma, Parabola, Healing Ministries, The Journal of the Central Conference of American Rabbis, and The American Journal of Hospice and Palliative Care. He has two recent articles, "The Bride of God: Jewish Erotic Theology" appears in Jews and Sex, published in Feb. 2008, "Water as a Medium of Alerted States of Consciousness in Early Jewish Mysticism," slated to appear in the spring issue of Anthropology of Consciousness. His book with Llewellyn, The Encyclopedia of Myth, Magic, and Mysticism, has been selected as a runner up in the 2007 National Jewish Book Award, and received Honorable Mention in the Jewish Library Association 2007 Book Awards. He is married and has two sons.