Freedom and the Rule of Law (Hardcover) 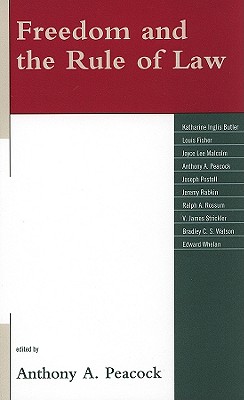 Freedom and the Rule of Law (Hardcover)


Not On Our Shelves—Ships in 1-5 Days
Freedom and the Rule of Law takes a critical look at the historical beginnings of law in the United States, and how that history has influenced current trends regarding law and freedom. Anthony Peacock has compiled articles that examine the relationship between freedom and the rule of law in America. Although this is a theme that has been a perennial one since America's founding, it is also one of particular importance today, and this book explains how history makes this apparent. The rule of law is fundamental to all liberal constitutional regimes whose political orders recognize the equal natural rights of all, and whose purpose is to protect those natural rights in addition to the general welfare. The rule of law was essential to achieving both of these ends and to reconciling them where necessary. But just how free is America today? It was certainly within the contemplation of the Founders that the federal judiciary would have a significant role in interpreting the Constitution, federal laws, and treaties, but it would be difficult to argue that those who framed and ratified the Constitution contemplated a role for the courts, particularly for the United States Supreme Court, of the magnitude they have today. The writers take the reader far back into history to the very roots of American Law by examining the English common law roots that provided the foundation for the rule of law in America. This book explores these phenomena and other recent developments in American freedom through history.
Anthony A. Peacock is associate professor of Political Science and Director of the Project on Liberty and American Constitutionalism at Utah State University. He is the author most recently of Deconstructing the Republic: Voting Rights, the Supreme Court, and the Founders' Republicanism Reconsidered (Washington, D.C.: The AEI Press, 2008) and A Brief Guide to The Federalist Papers (Washington, D.C.: The Heritage Foundation, forthcoming).