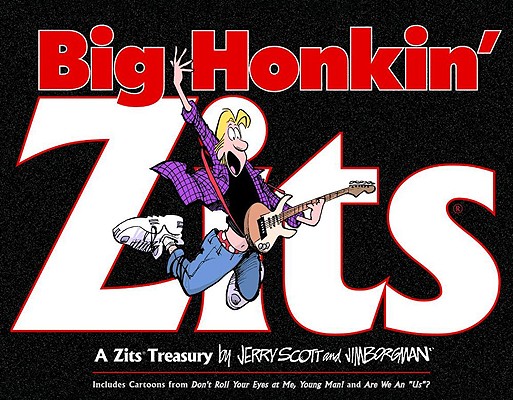 This is book number 6 in the Zits series.

Widely lauded by critics, colleagues, and readers, Zits is has been twice honored with the National Cartoonists Society's Reuben Award as the Best Newspaper Comic Strip, and received the Max and Moritz Award for Best International Comic Strip.

This treasury, Big Honkin' Zits, represents a compilation of Don't Roll Your Eyes at Me, Young Man! and Are We an "Us"?. With friends and family, Jeremy ponders life's great philosophical questions, such as, "If the universe is constantly expanding, how come the sky never gets any bigger?" He tackles serious issues, too, deciding with his buddy, Hector, to shave his head to support a friend's mom who's battling cancer.

Big Honkin' Zits masterfully guides its readers through the real-life joys and heartaches of being a teenager.
Jerry Scott is the co-creator of the award-winning comic strip Zits. He lives in central coastal California. Jerry's work on Baby Blues has delighted fans and wowed the cartooning world since he launched the strip with Rick Kirkman in 1990.