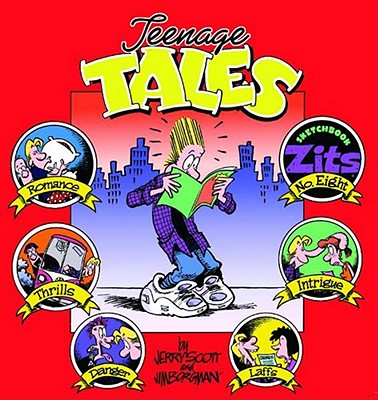 This is book number 8 in the Zits Sketchbook (Paperback) series.

Fifteen-year-old Jeremy Duncan is the heart and soul of puberty. A typical teen, Jeremy is shy, self-absorbed, and bored. He loves hanging out and playing the guitar. He lives in the shadow of his older brother's perfect 4.0 grade-point-average, athletic talents, and flawless complexion. Jeremy's girlfriend, Sara, loves that she can get him to do anything for her. His best friends are Hector and Pierce, whom he's known for-almost-ever. His parents? Uncool baby boomers. (Unless you're a parent, then they are two suburban professionals just trying to do the best they can with a teenager going through that ""awkward"" phase.)

The enormously popular comic strip Zits depicts teenage and parental angst like no other. Teenage Tales is a cornucopia of Zits for die-hard fans everywhere. Zits can be seen in more than 1,100 newspapers, which is almost unheard of-only 18 other comic strips have achieved that extraordinary milestone. Zits has also won the National Cartoonists Society's Best Comic Strip of the Year award for two years in a row.

Rick Kirkman and Jerry Scott have delighted fans and impressed the cartooning world since the strip launched in 1990, and the passion continues today. Rick calls Phoenix, Arizona, home. Jerry, also the cocreator of Zits, lives in central coastal California. Jim Borgman and his wife are the proud parents of five children. They live in Cincinnati, Ohio. Online: www.kingfeatures.com/features/comics/zits/