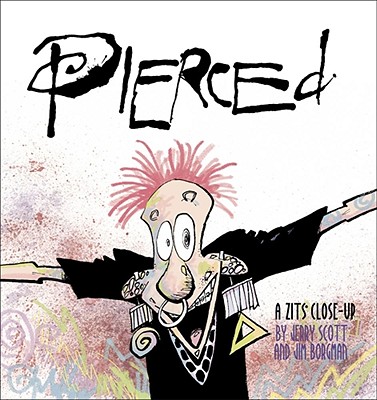 By Jerry Scott, Jim Borgman (With)

This is book number 20 in the Zits series.

Zits is "one of the freshest and most imaginative strips." Los Angeles Times

Twice honored as the Best Newspaper Comic Strip, Zits appears in more than 1,600 newspapers and is read daily by more than 45 million fans.

In Pierced, Jerry Scott and Jim Borgman have hand-picked strips spotlighting Pierce, who is often the most popular (and certainly the most perforated) character in their strip. One of Jeremy's best friends and the drummer in the band, Pierce's audacious body art gives all of the outward signs of a fierce nonconformist kid living on the edge. But beneath the metal and tattoo ink lies the soul of the caring, loyal friend and animal lover within. Or as Jeremy describes him, "Face of silver, heart of gold."
Jerry Scott is the co-creator of the award-winning comic strip Zits. He lives in central coastal California. Jerry's work on Baby Blues has delighted fans and wowed the cartooning world since he launched the strip with Rick Kirkman in 1990.