Bowling Alone: The Collapse and Revival of American Community (Paperback) 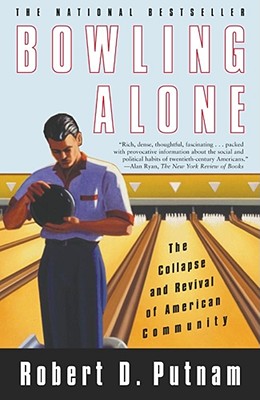 Bowling Alone: The Collapse and Revival of American Community (Paperback)


Special Order—Subject to Availability
Once we bowled in leagues, usually after work—but no longer. This seemingly small phenomenon symbolizes a significant social change that Robert Putnam has identified in this brilliant volume, which The Economist hailed as “a prodigious achievement.”

Drawing on vast new data that reveal Americans’ changing behavior, Putnam shows how we have become increasingly disconnected from one another and how social structures—whether they be PTA, church, or political parties—have disintegrated. Until the publication of this groundbreaking work, no one had so deftly diagnosed the harm that these broken bonds have wreaked on our physical and civic health, nor had anyone exalted their fundamental power in creating a society that is happy, healthy, and safe.

Like defining works from the past, such as The Lonely Crowd and The Affluent Society, and like the works of C. Wright Mills and Betty Friedan, Putnam’s Bowling Alone has identified a central crisis at the heart of our society and suggests what we can do.
Robert D. Putnam is the Malkin Research Professor of Public Policy at Harvard University and a former Dean of the John F. Kennedy School of Government. Nationally honored as a leading humanist and a renowned scientist, he has written fourteen books, including the bestselling Our Kids and Bowling Alone, and has consulted for the last four US Presidents. In 2012, President Obama awarded him the National Humanities Medal, the nation’s highest honor for contributions to the humanities. His research program, the Saguaro Seminar, is dedicated to fostering civic engagement in America. Visit RobertDPutnam.com.
Alan Ryan The New York Review of Books Rich, dense, thoughtful, fascinating...packed with provocative information about the social and political habits of twentieth-century Americans.

Richard Flacks Los Angeles Times Putnam styles himself as a kind of sociological detective....The reader experiences the suspense that can happen in both detective fiction and science.

Wendy Rahn The Washington Post This is a very important book; it's the de Tocqueville of our generation. And you don't often hear an academic like me say those sorts of things.

Alan Ehrenhalt The Wall Street Journal A powerful argument...presented in a lucid and readable way.