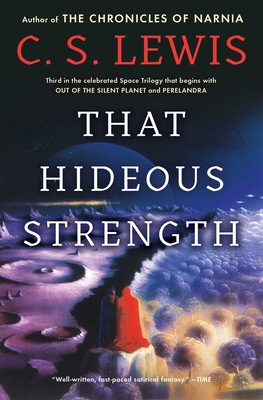 This is book number 3 in the Space Trilogy (Paperback) series.

Written during the dark hours immediately before and during World War II, C. S. Lewis's Space Trilogy, of which That Hideous Strength is the third and final volume, stands alongside such works as Albert Camus's The Plague and George Orwell's 1984 as a timely parable that has become timeless, beloved by succeeding generations as much for the sheer wonder of its storytelling as for the significance of its moral concerns.

The final book in C. S. Lewis's acclaimed Space Trilogy, which includes Out of the Silent Planet and Perelandra, That Hideous Strength concludes the adventures of the matchless Dr. Ransom. The dark forces that were repulsed in Out of the Silent Planet and Perelandra are massed for an assault on the planet Earth itself. Word is on the wind that the mighty wizard Merlin has come back to the land of the living after many centuries, holding the key to ultimate power for that force which can find him and bend him to its will. A sinister technocratic organization is gaining power throughout Europe with a plan to "recondition" society, and it is up to Ransom and his friends to squelch this threat by applying age-old wisdom to a new universe dominated by science. The two groups struggle to a climactic resolution that brings the Space Trilogy to a magnificent, crashing close.
C.S. Lewis was a professor of medieval and Renaissance literature at Oxford and Cambridge universities who wrote more than thirty books in his lifetime, including The Screwtape Letters, The Chronicles of Narnia, and Mere Christianity. He died in 1963.
The New Yorker In his usual polished prose, the author creates an elaborate satiric picture of a war between morality and devilry.

The New Yorker If wit and wisdom, style and scholarship are requisites to passage through the pearly gates, Mr. Lewis will be among the angels.

Los Angeles Times Lewis, perhaps more than any other twentieth-century writer, forced those who listened to him and read his works to come to terms with their own philosophical presuppositions.