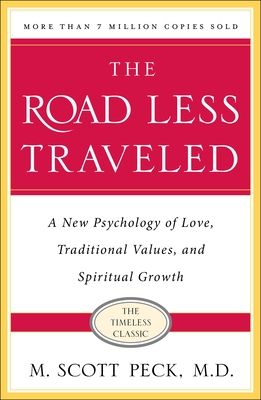 By M. Scott Peck
List Price: $18.99
Our Price: $18.00
(Save: $0.99 5%)
On Our Shelves Now at:
Now featuring a new introduction by Dr. M. Scott Peck, the twenty-fifth anniversary edition of the classic bestseller The Road Less Traveled, celebrated by The Washington Post as “not just a book but a spontaneous act of generosity.”

Perhaps no book in this generation has had a more profound impact on our intellectual and spiritual lives than The Road Less Traveled. With sales of more than seven million copies in the United States and Canada, and translations into more than twenty-three languages, it has made publishing history, with more than ten years on the New York Times bestseller list.

Written in a voice that is timeless in its message of understanding, The Road Less Traveled continues to help us explore the very nature of loving relationships and leads us toward a new serenity and fullness of life. It helps us learn how to distinguish dependency from love; how to become a more sensitive parent; and ultimately how to become one’s own true self.

Recognizing that, as in the famous opening line of his book, “Life is difficult” and that the journey to spiritual growth is a long one, Dr. Peck never bullies his readers, but rather guides them gently through the hard and often painful process of change toward a higher level of self-understanding.
M. Scott Peck, M.D. is the author of the New York Times best-seller The Road Less Traveled, with six million copies in print. His other books include Further Along the Road Less Traveled, The Road Less Traveled and Beyond, Meditations from the Road and Golf and the Spirit.
Phyllis Theroux The Washington Post Not just a book, but a spontaneous act of generosity.