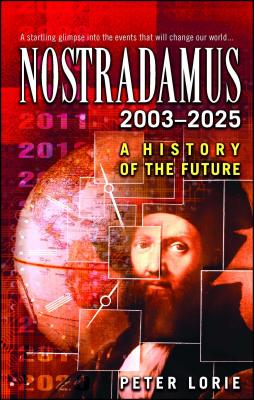 
Not On Our Shelves—Ships in 1-5 Days
(This book cannot be returned.)
Who wouldn't want to know the answer to the question:
"WHAT WILL HAPPEN NEXT?"
For hundreds of years, philosophers, scientists, and mystics have studied the enigmatic writings of the great prognosticator Nostradamus for clues as to what our future holds. Drawing upon recent investigations undertaken by government agencies, major corporations, and noted works by world-renowned researchers, this book contains never-before revealed predictions for the years 2003-2025 -- including a haunting reference to the September 11 attacks on the Twin Towers in one of Nostradamus's most famous quatrains.
Arranged in chronological year-by-year order of events, predictions range from the future of science and technology, to drastic changes in climate, population explosions, political upheaval, and social and cultural milestones for humanity. For all those who wish to know the foretold destiny of our world in the next quarter century, this is a must-have guide for the future.
Peter Lorie has written extensively for the new age market, including books about predictions, superstitions, and spiritual guides such as Nostradamus.