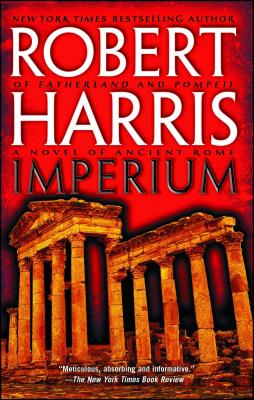 
On Our Shelves Now at:
From the bestselling author of Fatherland and Pompeii, comes the first novel of a trilogy about the struggle for power in ancient Rome.

In his “most accomplished work to date” (Los Angeles Times), master of historical fiction Robert Harris lures readers back in time to the compelling life of Roman Senator Marcus Cicero. The re-creation of a vanished biography written by his household slave and righthand man, Tiro, Imperium follows Cicero’s extraordinary struggle to attain supreme power in Rome.

On a cold November morning, Tiro opens the door to find a terrified, bedraggled stranger begging for help. Once a Sicilian aristocrat, the man was robbed by the corrupt Roman governor, Verres, who is now trying to convict him under false pretenses and sentence him to a violent death. The man claims that only the great senator Marcus Cicero, one of Rome’s most ambitious lawyers and spellbinding orators, can bring him justice in a crooked society manipulated by the villainous governor. But for Cicero, it is a chance to prove himself worthy of absolute power. What follows is one of the most gripping courtroom dramas in history, and the beginning of a quest for political glory by a man who fought his way to the top using only his voice—defeating the most daunting figures in Roman history.
Robert Harris is the author of Pompeii, Enigma, and Fatherland. He has been a television correspondent with the BBC and a newspaper columnist for the London Sunday Times and The Daily Telegraph. His novels have sold more than ten million copies and been translated into thirty languages. He lives in Berkshire, England, with his wife and four children.
"Meticulous, absorbing and informative." - The New York Times Book Review

"A joy to read in every way." - The Independent

"An entertainingly vivid picture of one of history's most fascinating elected officials." - USA Today

"In Harris's hands the great game [of politics] becomes a beautiful one." -- The Times (London)

"Excellent.... Full of back-biting and double-dealing, compromise and intrigue." -- Time Out