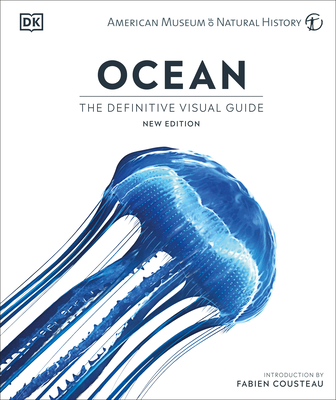 By Fabien Cousteau (Introduction by), DK


Not On Our Shelves—Ships in 1-5 Days
An enhanced edition of DK’s exhaustive guide to the underwater world.


This authoritative, sumptuously illustrated encyclopedia is now in its third edition. Illustrated with a blend of beautiful and informative illustrations, maps, and photography, it is a broad-ranging, in-depth guide to both physical oceanography and marine life.

A comprehensive introduction explains important principles and processes, from the geology of the seafloor to the chemistry of seawater. The next two chapters look at key environments – from the seashore out to the open ocean – and the main groups of ocean life. Both of these chapters include systematic directory sections that contain in-depth visual profiles of key locations and species. The final chapter is a detailed, 60-page atlas of the world’s oceans and seas, illustrated with maps compiled from satellite measurements of the ocean floor. Distributed throughout the book are feature spreads on the impact that humans are having on the marine environment, covering topics ranging from plastic pollution to ocean acidification.

Thoroughly updated to include the latest research on ocean science and profiles of newly discovered species, Ocean remains an indispensable, all-encompassing visual guide to the marine world.

A marine explorer and documentary filmmaker, Fabien Cousteau has a particular interest in the study of sharks and their behavior. Cousteau wrote the foreword to Jennifer Swanson's Astronaut-Aquanaut: How Space Science and Sea Science Interact. He also wrote the introduction to Ocean: The Definitive Visual Guide. He was the editor in chief of the Illustrated Encyclopedia of the Ocean.

Robert Dinwiddie is a science writer specializing in educational illustrated books on astronomy, cosmology, earth science, and the history of science. He has written or contributed to more than 50 books, including the DK titles Universe, Space, The Stars, Science, Ocean, Earth, and Violent Earth. He enjoys travel, sailing, and stargazing.