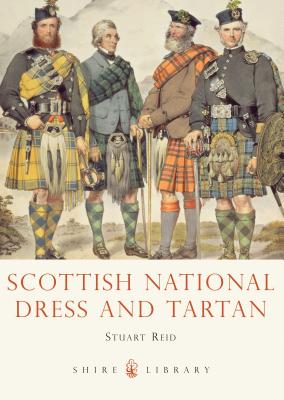 Tartan is an enormously popular pattern in modern fashion and Scottish National Dress is recognised around the world. This book reveals the origin and development of tartans and Scottish national costume. Beginning as Highland dress, it was originally peculiar to certain areas of Scotland but is now generally accepted as its national costume.

What was once ordinary working clothing of a distinctive local style has been formalised and embellished to turn it into a ceremonial dress suitable for days of celebration, while tartans once woven according to the fancy of those who wore them, have also become fixed with certain patterns prescribed for different families, areas or institutions. This process was not, as is popularly thought, a phenomenon begun by the romantic novels of Sir Walter Scott, but began long before as a reaction to the Union with England in 1707. This book not only traces its evolution from earliest time, but the process by which it became Scottish National Dress.

Stuart Reid was born in Aberdeen in 1954 and is married with two sons. He has worked as a librarian and a professional soldier and his main focus of interest lies in the 18th and 19th centuries. This interest stems from having ancestors who served in the British Army and the East India Company and who fought at Culloden, Bunker Hill and even in the Texas Revolution. His books for Osprey include the highly acclaimed titles about King George's Army 1740-93 (Men-at-Arms 285, 289 and 292), and the British Redcoat 1740-1815 (Warrior 19 and 20).