Democracy, Law and the Modernist Avant-Gardes: Writing in the State of Exception (Hardcover) 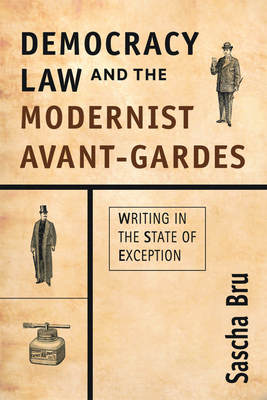 Democracy, Law and the Modernist Avant-Gardes: Writing in the State of Exception (Hardcover)


Special Order—Subject to Availability
This is the first book to look at the ties between European modernism and democracy in a cross-cultural manner. Focusing on the continental avant-gardes of the nineteen-tens and twenties, Sascha Bru's original and provocative book fundamentally revises our understanding of modernism's cultural and political history. Bru brings together a wide range of European experimental writers and provides detailed analyses of Italian futurist F.T. Marinetti, German Dadaist Richard Huelsenbeck and Belgian expressionist Paul van Ostaijen. Bru locates these writers within their exceptional democratic context and demonstrates how the modernist avant-garde, during the First World War and the upheavals that followed, found itself caught up in a series of 'states of exception'. In such states legal democratic institutions were bracketed and set aside, and 'literature' as an autonomous realm was temporarily suspended. Faced with extreme forms of politicisation, avant-gardists throughout Europe tried to safeguard literature's autonomy in a variety of ways. These included turning politics and law into genuinely artistic materials and producing a repertoire of alternatives to existent frameworks of democracy.Against assertions that anti-art avant-garde gestures were meant to overcome art's autonomy and approximate the condition of politics, Bru shows that European avant-gardists may well have been one of the staunchest defenders of art's sovereignty in modern times.Key Features* Facilitates dialogue between Anglo-American and European modernist studies* Presents new interpretations of Berlin Dada, futurism and expressionism, and brings an innovative historical framework with which to analyse continental modernism* Provides an original perspective on modernist writing and theory during the first decades of the foregoing century* Offers, in the introductory chapter, a survey of ways in which to relate experimental writing to politics.
Sascha Bru is professor at the Faculty of Arts of the University of Leuven (Belgium). He has produced over a dozen books on European avant-gardes and modernisms, including Democracy, Law and the Modernist Avant-Gardes: Writing in the State of Exception (EUP, 2009) and the co-edited volume The Oxford Critical and Cultural History of Modernist Magazines: Europe, 1880-1940 (OUP, 2016).