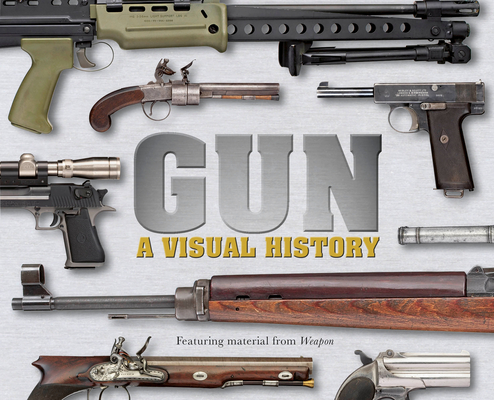 
Not On Our Shelves—Ships in 1-5 Days
Watch a 700-year history unfold, from the medieval “hand-gonne” to today’s technologically advanced assault weapons.

Discover how gun design influenced warfare, from the 15th century when the arquebus defeated swordsmen, to the 20th century when the submachinegun gave the military vastly increased firepower. Guns: A Visual History shows in unique visual detail on how gun design evolved. It features more than 300 iconic examples, including the military AK-47 assault rifle and the pistol used by many police forces – the Glock 17. Each weapon is shown in close up with details of its design, barrel, calibre, and firepower.

This comprehensive volume also features sporting guns, anti-tank weaponry and concealed assassin spy guns, such as the umbrella gun that killed Georgi Markov in 1978. It takes you inside iconic firearm firms such as Biretta, Colt and Lee Enfield, and tells stories of infamous sharpshooters from Dick Turpin to Al Capone.

Whether you collect firearms or enjoy field sports and military history, Guns: A Visual History is an unmissable reference title.
DK was founded in London in 1974 and is now the world's leading illustrated reference publisher and part of Penguin Random House, formed on July 1, 2013. DK publishes highly visual, photographic nonfiction for adults and children. DK produces content for consumers in over 87 countries and in 62 languages, with offices in Delhi, London, Melbourne, Munich, New York, and Toronto. DK's aim is to inform, enrich, and entertain readers of all ages, and everything DK publishes, whether print or digital, embodies the unique DK design approach. DK brings unrivalled clarity to a wide range of topics with a unique combination of words and pictures, put together to spectacular effect. We have a reputation for innovation in design for both print and digital products.   Our adult range spans travel, including the award-winning DK Eyewitness Travel Guides, history, science, nature, sport, gardening, cookery, and parenting. DK’s extensive children’s list showcases a fantastic store of information for children, toddlers, and babies. DK covers everything from animals and the human body, to homework help and craft activities, together with an impressive list of licensing titles, including the bestselling LEGO® books. DK acts as the parent company for Alpha Books, publisher of the Idiot's Guides series and Prima Games, video gaming publishers, as well as the award-winning travel publisher, Rough Guides.