Believe in Yourself: What We Learned from Arthur (Hardcover) 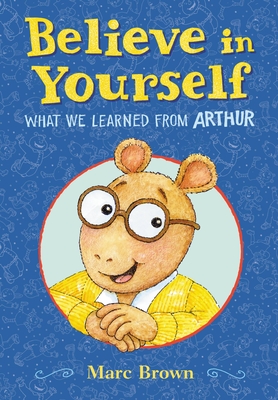 Believe in Yourself: What We Learned from Arthur (Hardcover)


In Stock—Click for Locations
As the award-winning Arthur TV series reaches its twenty-fifth anniversary, what better way to celebrate America's favorite aardvark than this collection of life lessons perfect for graduations and other milestones!

Join Arthur and his friends as they share the funniest and most heartfelt moments from the longest running children's television show in US history and classic book series created by master storyteller Marc Brown. This treasure trove of quotes and life lessons is divided into five sections that will inspire readers of all ages to listen to their hearts, work together, have an original point of view, and most of all, to believe in themselves!

Featuring over 60 pieces of all-new artwork, here is a keepsake perfect for superfans young and old—as well as the next generation being introduced to this beloved character.

Marc Brown is the creator of the bestselling Arthur Adventure book series which has over 160 million Arthur books in print. He also is the executive producer of the longest running children's television series, Arthur, on PBS. He lives in New York City and Martha's Vineyard.

"Brown compiles capital-L Life Lessons from everyone's favorite aardvark…. The volume should be useful as bibliotherapy and also as an annotated visit with the beloved characters."

“The wonderful art is as appealing as ever.”—School Library Journal