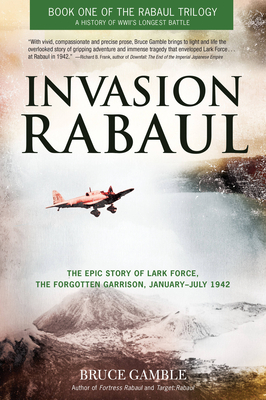 The riveting first book in Bruce Gamble's critically acclaimed Rabaul trilogy, originally published in hardcover entitled Darkest Hour, which chronicles the longest battle of World War II. January 23, 1942, New Britain. It was 2:30 a.m., the darkest hour of the day and, for the tiny Australian garrison sent to defend this Southwest Pacific island, soon to be the darkest hour of the war. Lark Force, comprising of 1,500 soldiers and six nurses, faced a vastly superior Japanese amphibious unit poised to overrun Rabaul, capital of Australia's mandated territories. Invasion Rabaul, the first book in military historian Bruce Gamble's critically acclaimed Rabaul trilogy, is a gut-wrenching account of courage and sacrifice, folly and disaster, as seen through the eyes of the defenders who survived the Japanese assault. Gamble's gripping narrative follows key individuals -- soldiers and junior officers, an American citizen and an Army nurse among them -- who were driven into the jungle, prey to the unforgiving environment and a cruel enemy that massacred its prisoners. The dramatic stories of the Lark Force survivors, told here in full for the first time, are among the most inspiring of the Pacific War -- and they lay a triumphant foundation for one of today's most highly praised military nonfiction trilogies.

Bruce Gamble is a retired naval flight officer and a former historian with the Naval Aviation Museum Foundation. He is the author of several critically acclaimed books about the Pacific War: Swashbucklers and Black Sheep (2012), an illustrated combat history of Marine Fighting Squadron 214 in the Pacific; Black Sheep One, the definitive biography of Greg "Pappy" Boyington; Invasion Rabaul, the first book of the Rabaul trilogy; and Fortress Rabaul, the second book of the Rabaul trilogy. Bruce lives near Panama City, Florida. For more, visit www.brucegamble.com

"Gamble pored over forgotten files and official reports and conducted interviews with the handful of surviving veterans to craft this tragic, heroic story. A terrific tale about a little-known (to Americans) battle." - WWII History Magazine

"Gamble's first of a trilogy of books is enlightening for the history that has largely been forgotten and it is superbly done." - Travel for Aircraft

"The author takes a grunt's-eye view of not just the battle, but its horrid aftermaths for POWs." - World War II