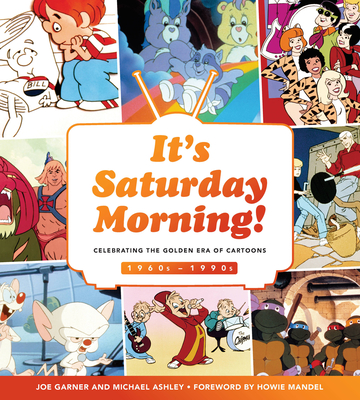 
Not On Our Shelves—Ships in 1-5 Days
With concept art, archival images, all-new interviews, and a foreword by Bobby’s World creator and funnyman Howie Mandel, It's Saturday Morning! celebrates the shows, characters, songs, and commercials that made Saturday mornings a pop culture event—decade by decade.

Broadcasting into family living rooms from the 1960s to the 1990s, this wildly creative art form wrought a beloved rite of passage. From the hours of 8 a.m. to 12 p.m., parents could sleep in while their children plopped on the couch to consume cartoons galore. From The Bugs Bunny Show, The Jetsons, and Jonny Quest to The Smurfs, He-Man, and Animaniacs, this window of time promised pure entertainment and an experience that united generations.

Organized by decade,find profiles of the most beloved Saturday morning cartoons:Each show profile is accompanied by easy-reference stats (years on air, network, number of episodes, and characters and voice actors), promotional and concept images of the cartoons, and candid photos of its creators and actors. The commentary explores the cultural setting that influenced its creation and behind-the-scenes insights from the show’s producers and artists.

This entertaining walk down memory lane is made complete by a review of some of the iconic products advertised between these favorite cartoons. “After These Messages…” segments provide fascinating facts about the merchandise that appeared in Saturday morning commercials, such as the Slinky, Lite-Brite, Cabbage Patch Kids, and Golden Crisp cereal.

This exquisitely produced guide to the golden era of cartoons is perfect for artists and illustrators, pop culture fanatics, or anyone who loves a heaping portion of nostalgia.

Joe Garner is a six-time New York Times best-selling author and one of the premiere chroniclers of America's popular culture. His book, We Interrupt This Broadcast, not only hit the New York Times bestseller list, it was a Wall Street Journal, USA Today, and Publisher's Weekly bestseller. Among his other bestsellers are Now Showing: Unforgettable Moments from the Movies and his comedy history, Made You Laugh: The Funniest Moments in Radio, Television, Stand-Up and Movie Comedy. He documented the greatest moments in NFL history in 100 Yards of Glory, his fourth collaboration with famed sportscaster Bob Costas. Jeff Gordon: His Dream, Drive & Destiny, the first-ever authorized biography of the racing legend, was Garner's sixth New York Times bestseller.

Michael Ashley is a screenwriter and ghostwriter whose creative talents were behind the Disney TV film Girl Versus Monster and the books The Six-Figure Writer (2015) and Fiction in a Weekend (2017). He has ghostwritten both fiction and nonfiction books and established his own creative content company, Ink Wordsmiths. A former consultant for Disney, Michael worked as a reader for Creative Artists Agency's Literary Department. He began his writing career as a reporter for the Columbia Missourian and has served as a columnist for publications, including Newsbase. Michael lives in Los Angeles.

It’s Saturday Morning! would be an ideal addition to any coffee table, allowing guests to leaf through its ample pages and reminisce about cheerier times—Thrilling Days of Yesteryear

This is a pick up for any cartoon fan, and it begs to be read over and over as you find tons of information about some of your favorite cartoons from 1960s to 1990s—BSC Kidss

This tribute is sure to bring back memories! For those of us who faithfully sat in front of the television, every Saturday morning, this book is a joy to read.—New Age Mama

Each decade is given ample time and is accompanied by full color photos and facts about each memorable program. In addition, there is an occasional "After These Messages" break which profiles toys, breakfast cereals, and assorted pop culture gems.—Pop Culture Guy